My best achievement has been to marry and bring up children. No contest. So many life lessons packed into that process. And four bedrock relationships here in the present day.

Outside that, I especially love that I wrote and published ‘Out of Essex’ during the years from 2013 to 2015. Sometimes I look at its orange spine up on the shelf and think: “That’s yours, you persevering, semi-talented bastard!”

It came out of nowhere, then geminated at a surprising pace. It is not boasting to claim the book as unique.

Is it any good? That may depend on your political stance.

Like most wannabe writers, I had droned on for decades about being an author. I started a novel over a decade earlier, writing about 90 pages. Here’s how that one commenced:

East London, October 1999. Neil Finnegan streamed with the crowd up the stairs of the tube station, stomach knotted at the prospect of meeting Vince Bull in the flesh. Selling him the deal was another matter.

In late 2002, I wrote a mini-autobiography, six months before Maureen and I had our financial crash. After that, I had to work my nuts off to stay financially liquid.

Was still working like a dog in April 2013, when Margaret Thatcher died. I hadn’t thought about her for years. To my mind, she had one positive to her name: the first female to become British prime minister. You cannot knock that stunning achievement, given the deep patriarchy of her time in office. Credit where it’s due.

But that’s it. Britain won the Falklands War under Maggie, but the technology and strategic capability of its army and navy was such that only one winner was ever on the cards. After that, when you examine her record in office, it is a litany of moves that divided the country. Sending the UK’s mining industry into terminal decline, decimating workers’ rights, cutting benefits, kicking the mentally ill onto the streets. And, more than anything, privatising institutions that worked well in state hands, and opening the gates to private debt. Look where that led. In short, she was not benevolent. That’s me being very polite.

When a series of accolades began to pour out of the media, anger began to swell in me. A state funeral, for God’s sake, with dignitaries flying in from around the world. WTF? I was witnessing madness and delusion.

Knowing her religious convictions, I imagined the passage of her soul. And began to write a vicious short story detailing her arrival at ‘The Place’, met by angels. But then steered onwards.

Maggie was ushered on, past two black cats sniffing her feet. The temperature had risen. The corridor was narrowing, sloping downwards. Images on each wall terrified the root of her soul. British and Argentinean sailors flailing and screaming in the Falklands waters, and then Pinochet’s torture rooms beneath the Chilean football stadium. Blood on the ceiling. Detached limbs and eyes on the floor.

This was fun, as she began to intuit her inevitable destination.

Well over seven foot, blackly-clad, he looked as formidable as she had often fantasised. For a fleeting second, fighting down fear, Maggie wondered whether he might be “somebody I can do business with”.

Satan provides her with the memorial tribute that half the country may have been thinking but none of the mainstream British press had the guts to print.

“You devolved British thinking back to grocers’ epithets and crude sums involving the value of their houses. It was – still is – medieval, you moron, and now it’s your legacy.”

When finished, with Maggie looking aghast at a torture rack, I sent it to some friends, some of whom seemed to enjoy it. The pleasure throb was irresistible. I needed to write more.

What soon became evident, the more I read about Maggie, was the fruits of her campaigns to privatise major UK industries, and open the City of London to global banking. A widening chasm of nationwide poverty, umbilically linked to the further enrichment of the richest. By 2013, all of Britain’s major cities and towns were experiencing growing levels of homelessness, the welfare state was being hacked back, and debt had become the foundation of the British economy. Banks were untouchable, despite their catalytic role in the 2007-08 financial crisis.

Ever asked yourself why there are no longer enough council houses, or affordable renting stock? How did that start? Thanks Maggie.

The most eye-opening factor, which I had never found reason to look into, was the interest attached to the money created by commercial banks (which seems to over 85% of all money). Looking into this, it became clear that ordinary, bog-standard debt that almost everybody resorts to  gradually pulls wealth away from the bottom rungs of society. In short, that debt systems stealthily and slowly impoverish those at the foot of the pile. At this stage in Western history, there are no other financial systems.

So what would God do, to challenge Maggie’s legacy, and the egregious, underpinning financial systems? As my first few chapters fell into place, it dawned that She (oh yes) might send down a ‘benevolent ninja squad’ to sort things out. Spiritual super-heroes. How about dusting down the souls of Gandhi and Buddha. Satan could be their minder, as they adjusted from life without bodies to the corporeal 21st century.

But where to send them? I had recently rekindled friendships with old school friends from Southend-on-Sea, and decided that the Essex town could be the home for a breakaway society that made an effort to live without money. Growing its own food, using barter. And creating the seeds of a new consciousness that might overcome the material illnesses afflicting most of the modern world. God decided, in her cups, that Maggie could be reincarnated to act as a kind of PR voice for the ideals of the community, located in Southchurch Park, at the eastern end of the town.

And so it went. The joy of creating a River Thames tsunami engendered by Jesus was not to be under-estimated. Nor that of sending Satan on a fast, night-time motorbike ride along the A127 to confront and dine with the Puppet Master (the PM), who controls one of the main banking families. Also Maggie learning martial arts, from Satan’s sons Beelzebub and Belial. Buddha’s love of Arsenal football club. And the spiritual growth of Mike Burper, based on a bully remembered from schooldays.

Each morning, during the hypnagogic state that precedes full wakefulness, future chapters would begin to write themselves. Or I would be out on the bike, and the ideas would flow in. Cheers Universe.

I wrote things that made me crease with laughter (particularly Satan’s love of single malt whisky), and welded them to chunks of polemic explaining how the money system grips, manipulates and totally fucks over our world. And how paying more than a passing attention to newspapers and TV is an arterial route to self-induced lobotomy.

A lot of real conspiracy facts were thrown in, with enough detail to separate them from the theories that are casually chucked around. God was sick of the lies, and the warmongering and greed, and beginning to realise that Her only son might need a second visit to trigger a global transformation.

The climax had Maggie murdering a death squad sent by the PM to the park. God calls her back upstairs, frustrated at another collapsed experiment. Then my favourite section, where Jesus, Buddha, Gandhi and Dawn (a car windscreen cleaner, representing the true soul of the book) walk from Southend to Canary Wharf in a day. Instead of loaves and fish, Jesus distributes Gold Bars, the type made by McVities, to the suited hordes. And then it all kicks off. ‘Yesh consciousness’ gradually permeates. The world gets rocked.

It took about 18 months to write. Standing back, I was so chuffed.

‘Well done Kev, that is an audacious achievement,’ I told myself. Of course there were so many areas for improvement, all over the book. Most notably the over-loading of detail about the sheer crookedness of our world. And the need for more finely-developed characters, and a more complex plot. ‘But – even if next to nobody ever reads it – you have surpassed yourself in terms of the book’s ambition,’ I would whisper to myself, grinning softly.

Taking the standard route, I tried various agents and publishers with a few chapters, but none wanted to know. So I re-edited it, and tried again, with similar results. So be it. Fittingly, I used some PPI money from a few banks to print 50 copies, for friends and family.

Should I e-publish ‘Out of Essex’? It seems like a lot of trouble for little reward.

I would like to write another book, and await the muse rushing in again. That feels like the way forward. 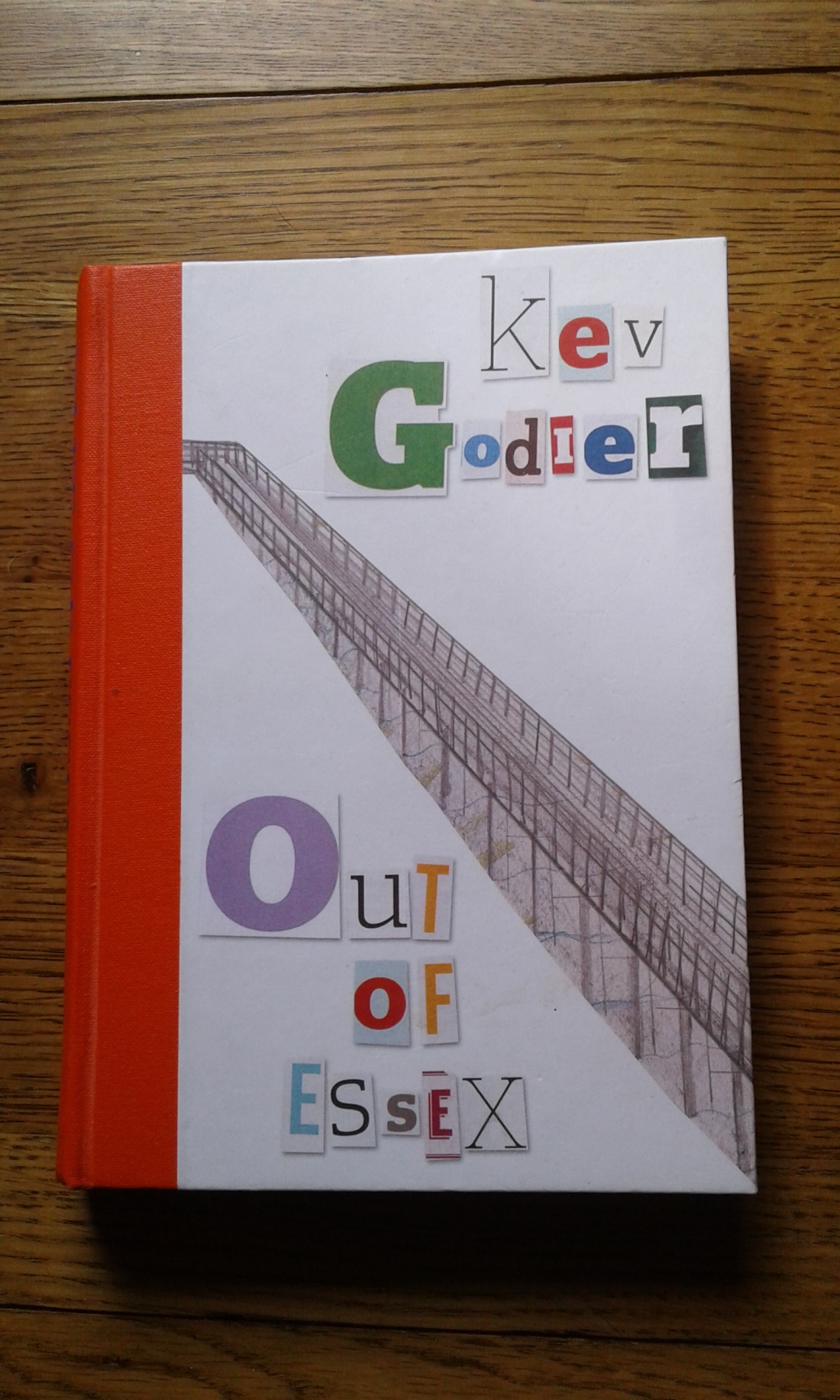