The demise of NewsBase in early May has suddenly thrown up spare time. So I get myself outdoors whenever possible.

One overcast Thursday, a few weeks back, rain was predicted, following buckets of the stuff several days earlier. I didn’t fancy a drenching out on the bike, but had been climbing the walls at home. I felt called by my favourite walk, along the Essex Way footpath.

Heading northeast from Great Waltham to Great Leighs, about 4 miles away. Under an ominous sky. 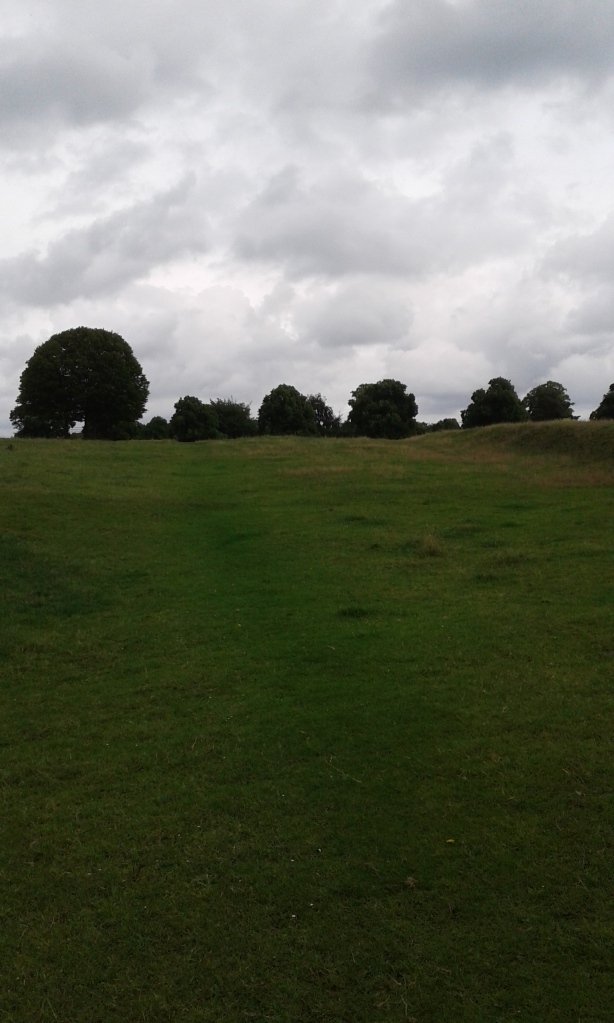 The trek started with a surprise.

For over four years, I have talked quietly, gently and lovingly to the local cow herd, trying to cajole them to the fence for meaningful intercourse. I have whispered promises of lush grass and their partner of choice, under the watchful eye of the bull.

They never showed much interest until now. 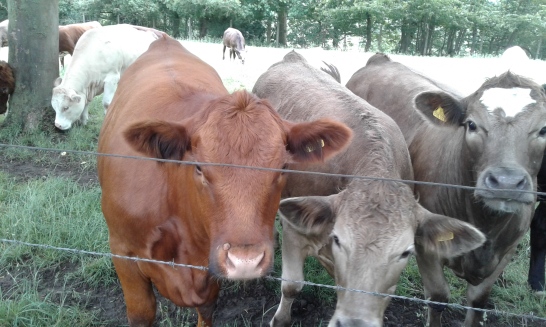 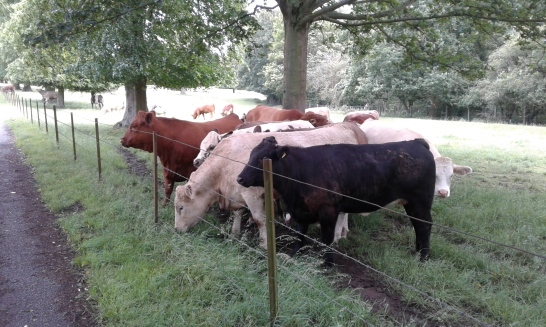 The route over the next couple of miles enchants and soothes me. 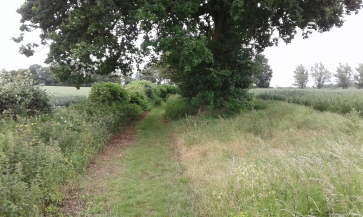 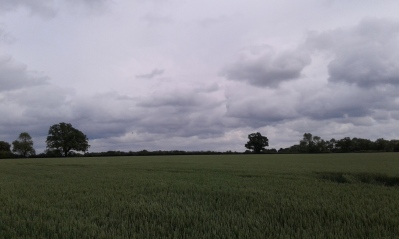 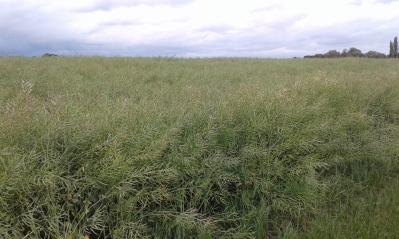 Then comes the small, picturesque hamlet of Chatham Green. Its structures and sights give as much pleasure now as they first did four years ago. 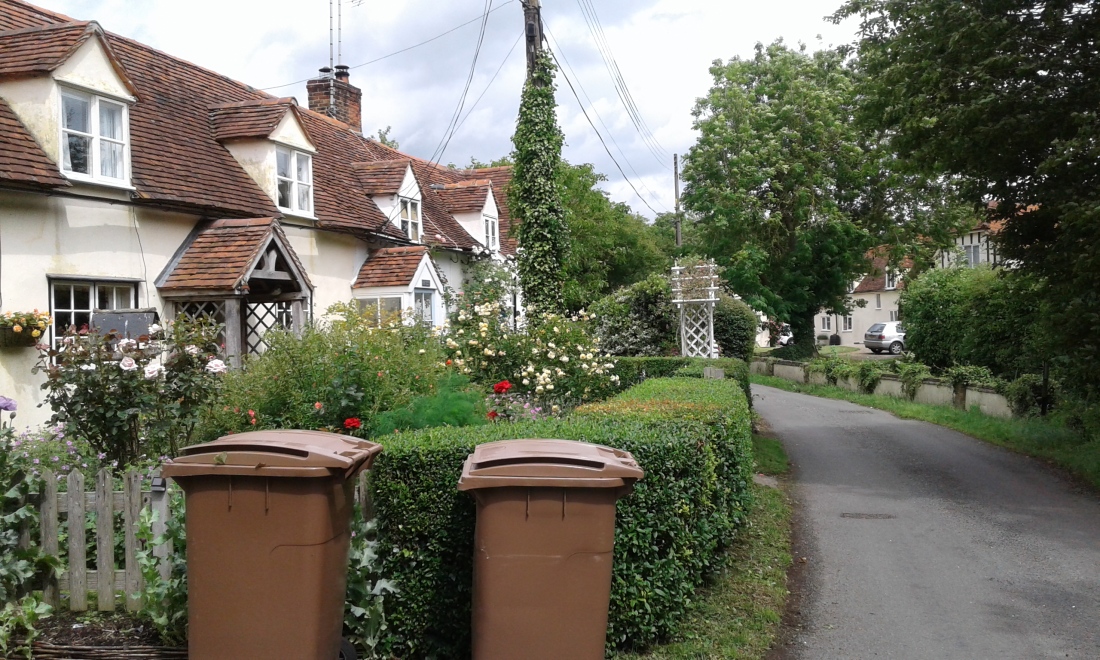 Walking is a no-brainer. Great exercise. And these rural routes are easy on the eye, even more so in June. The workout is also a way to liberate new thought, and perhaps find inspiration. I’ve been dwelling on work matters, inevitably.

The NewsBase collapse has cut away one of my two main sources of revenue. Replacing the lost work requires somehow finding a part-time job that pays £1300/month yet still allows me to get on with remaining tasks.

One initiative has been to try and create jobs tailored to my strengths. I’ve written to a number of export credit agencies in Europe, offering my services as an English writer. Not heard anything yet. Have also applied for a couple of advertised writing jobs, to no avail.

Always see the upside. For the last 26 years, my working weeks have stolen most of my precious time. So I am enjoying the easier life, but paying deep attention to conversations, messages and every other potential smoke signal that tickles my radar.

The Essex Way (no relation to TOWIE) strays off road again. Over the next section I work up a sweat, as it gets warmer. I’m carrying a waterproof coat, purely because heavy rain looks likely. 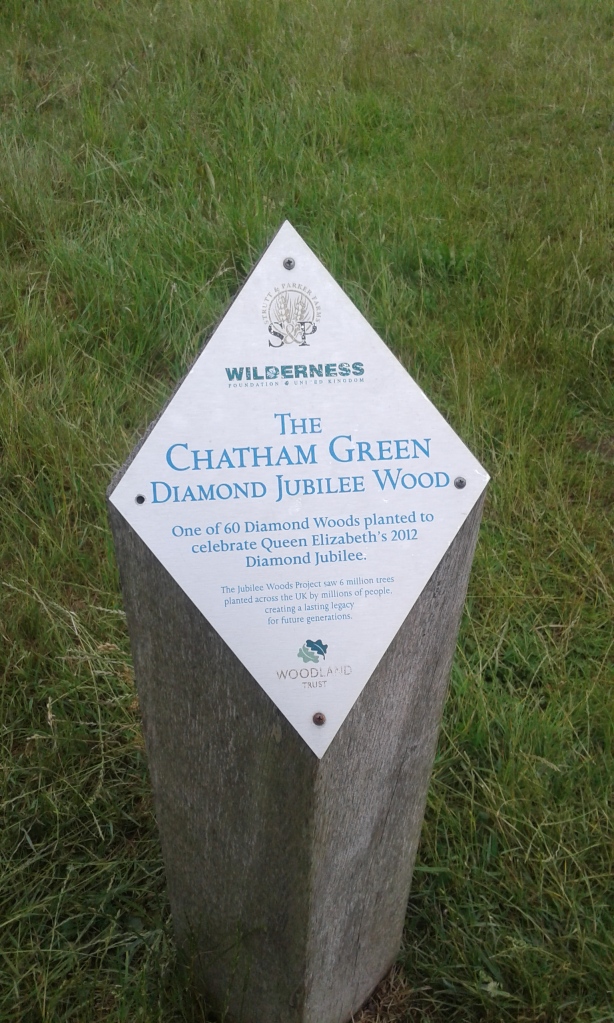 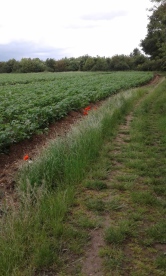 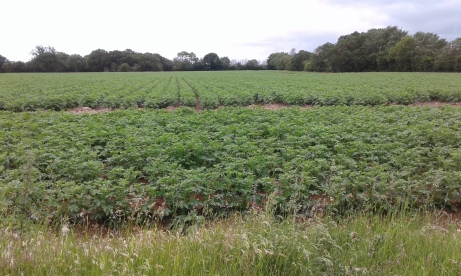 Then I arrive at my favourite stopping point on the walk: Little Leighs Church.

I leg it out here four or five times a year, often when moods are darker. And sit quietly on the bench, letting the sun and wind blast away all thought. Nowhere locally offers such solace. No religious inclinations are involved, just the need to unpack myself from cramped mental boxes. I love the untamed way in which the graveyard and adjacent fields merge, no fence.

Not far past the church, a bridge crosses a small stream. By gorgeous cottages and gardens.

Logic and instinct both say this place is perceived by others as magical. I have seen offerings left down by the water on previous walks. Flowers and food. And, sure enough, here is a red heart placed upon a log. Who could M be? Or W?

Great Leighs is nearing. My stomach rumbling. A hundred yards from the path, sculpted figures stand oddly above reeds, weeds and water.

They remind me that my dream last night ended with the actual smell on my real pillow of the swamp that I had visited while asleep. And that much in our world cannot be accounted for empirically. Consciousness, near-death experiences and the behaviour of sub-atomic particles, to name just three puzzles.

The Castle pub looms. I need to ‘chuck up my trotters’, as Danny Dyer says in Eastenders. 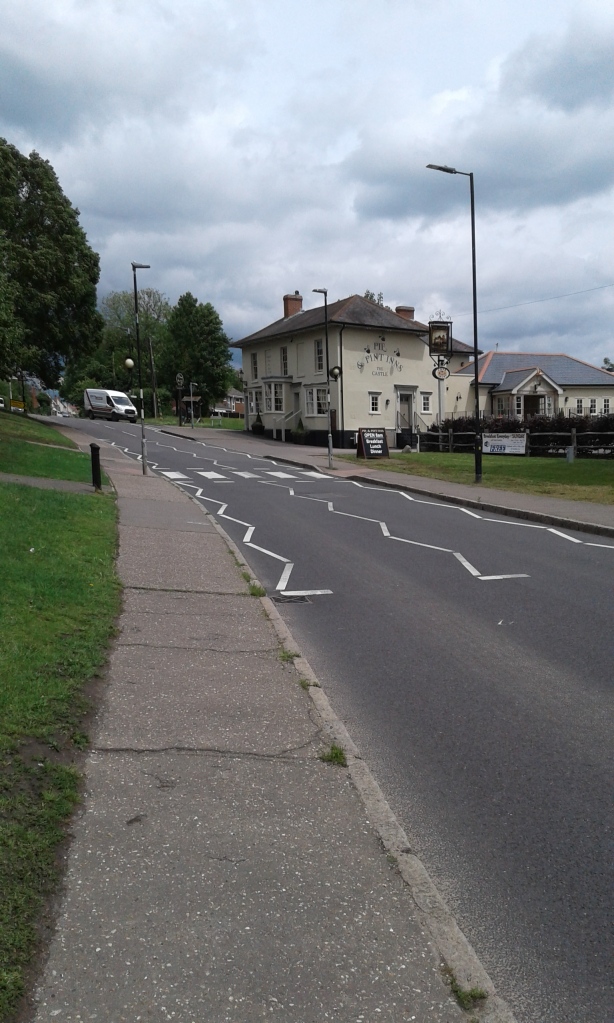 This pub is claimed to be England’s oldest. Formerly called the St Annes Castle.

It was taken into new management, revamped and overhauled several years back. The manager and staff are friendly enough. The car park slowly fills as I sit outside. Lots of older people arriving for lunch. There is also good business to be had from the crowd at Chelmsford racecourse, just down the road. The premises are clean. Everything works efficiently.

None of which changes my take. If you have something unique, then display and use it. But the opportunity to leverage the building’s history, as England’s oldest boozer, is all but buried, confined to little more than a small sign outside.

Swallowed by the ‘Pie and Pint Inns’ franchise. Choking and smothering the past. Interrupting these thoughts, the barman brings my scran. It’s decent enough.

It has started to rain. On goes the coat. I feel good, body robustly used over the past couple of hours. Starting back to Little Leighs, I reflect on something that I have been smiling quietly about for the past week.

On May 28, I wrote the universe a letter.

I did. Really. Honest guv. In my own handwriting, in blue ink. “Dear universe”, it began.

Then a few paragraphs, to say a heartfelt thanks for the pleasures and treasures of my first 62 years, and would it be possible to help out a bit more? Just for a while? I put it in an envelope, bought a stamp, (to show the universe I was serious), and surreptitiously slid it into my local postbox. Addressed to ‘The Universe’. Yes indeed.

The next day, round at my brother Neil’s watching football, he handed me a cheque. “Should help you out for a bit,” he said. I was overwhelmed with gratitude, joy and the beginnings of wonder.

The real twist came a week later. Neil rang to say that Dad had just days ago been contacted by an insurance company. Mum (lost to us in 2006, bless her) had quietly taken out an insurance policy on her own life back in 1953. 13 years after her death, the underwriters decided to check out whether she was still alive, and discovered that she had long gone. Would he care to claim the money? Neil told how he had persuaded Dad to send the proceeds my way. Which he has. Neil knows nothing of my vague occult proclivities, or of letters to universes.

If you want to argue that all this would have happened in any case, knock yourself out. Fill your boots. How can magic exist, you ask? How might it work? By what laws?

I have no idea. But more than once I have encountered the notion of asking the universe for help when in dire need. And to show a little gratitude.

One theme stands out from a bit of reading about magic: that you should strive to capture the attention of whoever runs the show (the Gods? the creator? a universal consciousness?), given the hefty volume of human prayers and requests flying their way.

Maybe it was the unbridled laughter of the postmen in Chelmsford sorting office, as they collapsed weeping, in heaps. Might that have nudged the hidden gears in our favour?

It’s not just money – which will help to tide us over a little longer – that has manifested. Our son Rory returned from university on June 1, with changed habits and routines. He has entered a Cheltenham half-marathon in September. He runs around the local lanes in preparation, as well as playing 6-a-side soccer for the first time. He is organising himself, unlike ever before. His sleeping patterns, once Dracula-like, now resemble those of his parents. Result.

I’m halfway back to Chatham Green, thinking about this stuff. The rain is heavier. I’m sweating inside my coat. Not for the first time, the growing scientific theory that we exist in a massively sophisticated computer simulation, controlled from without, slithers across my grey matter. If so, the idea of fate makes more sense than free will. And a letter to the universe? Might that be a simple ‘cheat’ to leap ahead in the game?

I have trotted six miles or so by the time Chatham Green hoves into view. A coffee would work wonders, but the pub is closed. Many rural pubs are trimming their opening hours, as expenses rise and the drinking clientele of old has to drive home soberly.

The picture below – of a footpath that I nickname ‘Moses’ – was the last that I took on the walk, as my mobile ran out of juice.

With a couple of miles still to go, physicality kicks right in. Essence of physicality. Still mainly dry in the hardening rain, albeit sopping with sweat, I realise that my bowels are beginning to niggle for evacuation. Minor requests, for now. But no toilets available until home.

It’s like being a kid again. Caught short and having to hang on. As a boy I would seek release in fields or woods. No hesitation in repeating that, 50 years later, but the downpour would add unwelcome complexity. I decide to lean into this problem, by talking to my lower intestinal movements. “OK Peri, just hold your horses a bit longer,” I suggest. “Mr Stalsis, could you possibly delay gratification?” I ask, politely.

I chant Buddhist mantras from 2012. The Medicine Buddha and Great Compassion Mantra. Buddhism was designed to tackle all kinds of suffering. Then the Lotus Sutra, first used in 1993, shortly before my old mate Jon Marks offered me an apprenticeship in journalism. Killing time. Distracting me.

I reach Howe Street, one mile to go. Each step seems to add infinitesimal momentum to the inner urges. It is helpful, and drier, to sit awhile at a bus stop.

Off again, five minutes later. I remember that Rory has asked me how many Arsenal players I would bring into West Ham’s first team, given the option. That keenly occupies the mind, as Peri throbs and thrums within me. Back at the outskirts of Great Waltham, tight-anused, I have assessed the Hammers as potentially so good that only three swaps are necessary. Monreal in at left-back; Torreira to replace Mark Noble; and Aubameyang somewhere up front.

Mr Stalsis will not be, cannot be, denied for much longer. A downhill stretch now, with each footfall triggering minor new pressures. A couple of hundred yards to go, and I dip into my last resort, to fend off these inexorable knocks at my back door.

I will try and augment my happiest list: memorable sexual moments. Could there be a relatively recent addition or two, despite our relationship of over 37 years? This captures the imagination magnificently, nurturing and beguiling me through almost all of the final stretch. There is a possible qualifier, I reckon.

And then I stop. Outside the house. Deliberately. Calling his bluff. “Who’s the Daddy then Peri?” I whisper, teasingly. He suffers that for a second or two.

Then unleashes a twisting gut tsunami that sends me sprinting for the front door, whipping out the key, and then diving inside, nearly there. I start to undress rapidly as I stumble through the kitchen and fall into the downstairs loo.

No need to describe the ensuing moment. Except to say that it was pure, magical, and rooted utterly in the now. Physicality incarnate. 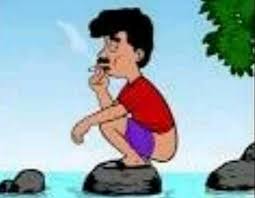