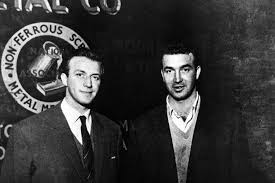 I’m always trying to pull as many memories as possible from my dad Eric, before his dementia obliterates them. When Maureen and I were chatting with him in midweek, he acknowledged that he had “kept bad company” as a younger man.

I recorded lots of it in Blog 19, but teased a few more nuggets from him this last week. His keenest memories of the ‘scrap metal mafia’ concern the notorious Richardson gang, which ruled South London in the 1960s. Dad had played football with Charlie Richardson, and afterwards began to buy metal from the Richardsons, much of which was probably stolen, according to the mix of legend and journalism which has accrued.

I asked whether Charlie was a terror and a thug on the football field, but apparently not so. Quite an anonymous player, Eric reckoned. In ‘business’, if you can call it that, things were wildly different. Those who crossed the gang were tortured at a scrap yard in Camberwell. Victims were reportedly subjected to electric shock, cigarette burning, whipping and being pinned to the floor with 6-inch nails or having toes removed with bolt cutters. Dad remembered Eddie Richardson as being the menacing brother, although he saw very little of him.

He reiterated past comments that if you dealt with them in a straightforward manner there was no question of coming to any harm. He reckoned there was a second London yard south of the Thames, bolted onto the empire as it grew bigger, but couldn’t recall where.

He has said before that he also traded with the Krays, the Richardsons’ equally notorious rivals in North London, but now he doesn’t think he did. Who knows?

But he told me again that one of his other football mates from the same East End team rose high in the police and was thrown out of the force for taking bribes from Ronnie and Reggie Kray.

The only time that any of this darkness impacted me directly was in 1968, in my first year at high school. I arrived home from school one afternoon, to find a strange car sitting in the driveway. It contained two men in suits, who wound down the window.

“When does you dad get home son?”

I hadn’t a clue, but asked them to wait, and went out back to kick a football around. Eric told me later that, when he returned, they asked him for the profit that they had been expecting, from a metals deal that he had brokered between London and Irish-Birmingham gangs. It all fell through, but the Brummie boys still wanted their cut, and had come looking for him.

Shades of Peaky Blinders? When I asked him again today, he thought it might be Bermondsey, not Birmingham. That didn’t detract from the fix he was in.

As a serious incentive, the men let him know they had clocked which routes brother Neil and I took home from school. They gave him a short period of time to find the dough.

On the day that they returned, waiting again in the driveway, he parked the van. But didn’t get out. They left their car, strolled across, and asked if he had the money. He said it was in the back of the van. He jumped out, opened the sliding side door, and went across to a sack. Extracted the contents, turned around, and poked the shotgun in their faces. “If you ever come near me or any of my family again, I will kill both of you.”

That evening, Mum, Dad, Neil and I took a sudden two-week family holiday in Brixham, Devon. Eric drove us overnight, as if the Devil himself were in pursuit. Decades later, he told me all the details. The gang never returned, proving perhaps that some bullies can be stood up to. He said he had been terrified. But he knew that any capitulation might forever mark him for further exploitation.

He got the gun from his mate Arthur in West London, who I had never heard of. Another guy involved in the collapsed deal was Eric’s mate Leslie, also from that same football team. (What the hell was the team name? Crime Athletic? Bad Company FC?)

Adding to the symmetry, it was Leslie’s place in Devon that we fled to. Which has in turn reminded me that Dad and Leslie managed to jointly buy a house in Islington, but then Leslie used the house as collateral on another failed venture.

Because Dad wanted some of his money back, he took Neil and I one afternoon to Leslie’s shop in Upminster. It sold high-end women’s clothing, and the clientele and staff were appalled to see three males clad in old garments shrouded with the soot and grime produced by burning the rubber away from copper wire. Fresh from Pitsea refuse tip, we sat doggedly until Leslie drove down to the shop and gave Dad a brown envelope.

Most of this is told from the safe vantage of a future from which I can look back and think ‘rather him than me’. Dad’s version is that he led a “colourful life”. I had a brave (but intimidating) man as a father.

Back in 2012-13, when I got into Buddhism, it stuck with me how the Buddha is said to have recommended people make a ‘right livelihood’. By pursuing ethical and compassionate work. It’s advice worth considering.

And occasionally I wonder about the possible negativity that may have trickled down the years for himself, Mum, Neil and I, as a result of the scrap metal profession. ‘Bad karma’, intangible and impossible to measure. 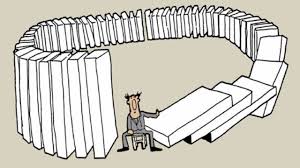