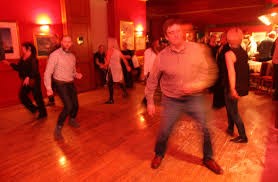 In autumn 1977, aged 20, I discovered that you can dance yourself happier. At an October midweek meeting of Birmingham University’s Northern Soul club. Within minutes of arriving, I was hit by how the blokes let themselves go when they danced, spinning and twisting like shamans to the heavy beat and fast tempos.

Before then, I had wasted countless evenings in discotheques that contained some of the worst predatory rituals conceived in the name of pleasure. Women danced and men ogled from the sides, clutching their beer for the courage needed at the end of the evening, when the mob would move in for the slow dances, grabbing the girls’ arses as they breathed lager fumes to overwhelm the potential victim. In the interim, one of your mates might take a piss in your beer which you had entrusted while taking a slash yourself.

My friend Si Gaze summed up the ambience, as we looked at a female strutting her stuff to Barry White. “I could go right through that,” he proclaimed. Was Si a ghost? Had he learned osmotic meditation techniques? Having checked to see if a Black and Decker drill hung from his baggies, I concluded his intent was carnal.

Northern Soul was a ritual into adulthood, and like all of those, required a little courage. A pint, and then some reconnaissance. It took about five seconds. The boys were out there with the girls, but the lads seemed to be thinking about their steps and movement – in some cases acrobatic back-drops and press-ups – rather than pulling.

The protocol appeared to be that the dancers could do what they liked, alone or in a group. My friends from Stoke and Uttoxeter, Rick Hibbert and Bob Parker, had talked up the fun, but seeing it danced out in action was mind-blowing, exhilarating and of course scary.

The first few steps involved years of self-consciousness vying with the untameable urge to dance freely, leaving behind those misery rituals. It almost immediately reminded me of moving with a football at my feet, in my own way. And there was indeed kit on display. Some magnificent pairs of baggy trousers, tapered to the ankle. Fred Perry tops, or just vests. But the dancing was the thing, to Tamla and Stax classics, James Brown and lesser-known performers like Chuck Wood and Earl Wright.

I got higher and higher, exploring my own avenues of movement. It felt like creating a symphony with my body, while my head went somewhere out into the solar system. I went home with a grin that lasted for days, and a date lined up.

The legacy lasted long after my student days. When Maureen’s nephew Michael got married in the 1990s, I had the floor to myself, at times. The joy was opiate-like. And lasted through the next day. The knee ligaments are knackered now, and muscles pull too easily, but the desire will never fade.

Quid pro quo. You can dance yourself happier.