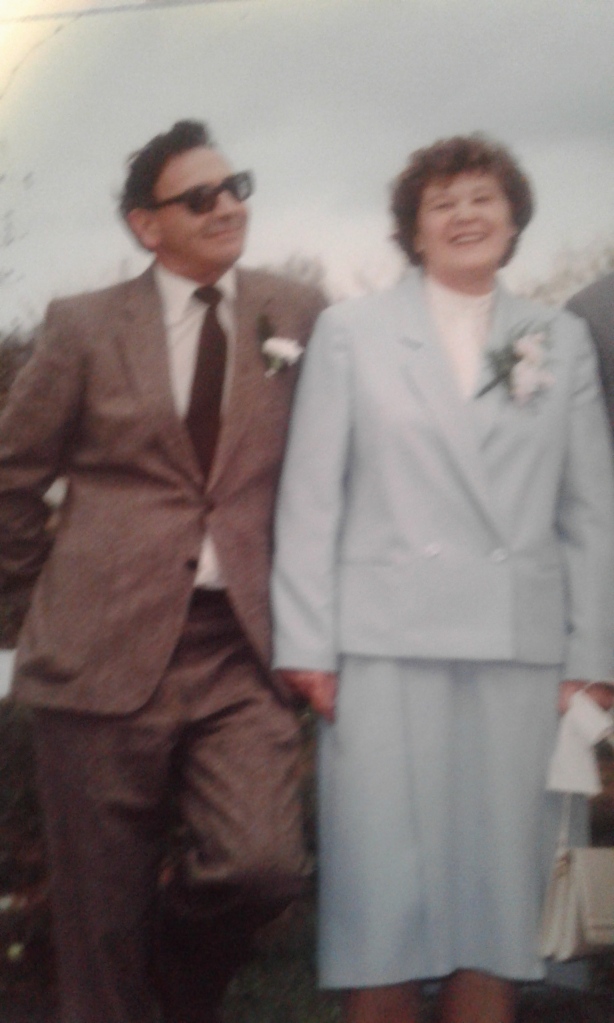 Time to speak about my mum, Phyllis Edith Godier. Bubbly, kind, thoughtful and intelligent are the words that come to mind. Not a dollop of Eric’s aggression.

At the age of 13, I wrote the following. “A blue-eyed woman of 42, my mother must have been a highly attractive girl in her youth. She has always been very kind to me and is the person that I turn to first.”

And some more descriptions. “My mum has always been very brainy. Not approving of long hair and modern trends, she enjoys listening to the radio, eating nice food and reading books. She does not dress in flashy clothes, but respectable ones. Does not enjoy new kinds of music, but the older songs, usually from at least 15 years back. And is altogether very kind-hearted, though having occasional bouts of temper when my brother and I misbehave.”

Phyl, as friends knew her, was born in January 1928 in north London. She grew up with six siblings within a tiny Islington flat. Her father’s bookmaking business was volatile, and her mum’s mental health ever more fragile. Summed up, perhaps, by those images of dinner thrown at the wall after a bad day at the races.

Life could be tough. As with Eric, Phyllis was evacuated, to escape German bombs. Accompanied by her twin sister, Stella, and her youngest sibling Christine. When she returned from Kettering, in the East Midlands, none of her academic prowess was blunted. She gained her matriculation certificate from Dame Alice Owen school, in Potters Bar, just before turning 16. But there was no luxury of further education. She took a variety of secretarial roles in the City, steadily improving her skills, and then met Eric, marrying him in 1952. He used to watch her play tennis. She would regularly mount his motorbike.

She valued politeness immensely, so my tongue-poking antics must have horrified her. But she encouraged Neil and I to try hard at school, and was rapturous that I gained a place at Westcliff High. When I was 11, and starting, she always cooked me breakfast before school. She would iron in the kitchen, singing along to the radio. So that her three males left the house looking presentable. Shortly after, when her mother finished her days in a care home, Phyllis would visit once a week, taking the long bus journey to London and back.

Mum influenced my love of sport. She would play badminton, cricket and tennis with us in the back garden. Playing fair ranked alongside playing well. She adored playing golf. Until her early 70s she maintained fitness and competence levels that belied her age, bringing home countless medals and trophies. Later in life, she took up bowls. Both sports brought friendships which lasted into old age. But nothing to top her love for Stella. They phoned each other weekly, and trusted each other implicitly.

Like her four sisters, Mum would read the newspaper, and watch the news with genuine interest and sharp memory. Word puzzles, crosswords and quizzes were a staple diet. One of her greatest abilities was to tell a story with unerring precision, remembering conversation to the word. Another was persistence in fighting her corner when she believed something to be right.

She was massively prudent with money. She stalked shops and scoured shelves. Often getting three, four or sometimes five for the price of one. Phyllis also had a fantastic ability to make us laugh, and not always with her. On one family occasion she tucked into some delicious ice cream, licking her lips at each mouthful. When she asked about the ingredients, and was told it contained mascarpone cheese, she refused to eat any more.

She could be relied upon. I could rely on her remembering birthdays, telephoning Maureen and I each week, and giving the kids some pocket money. She doted on and spoiled her grandchildren, and regularly took them to London, Southend and elsewhere. Her Sunday lunches were utterly reliable, with beautiful roast potatoes the highlight, followed inevitably by a seductive range of high-calorie desserts.

Phyllis commuted to London until well into her 60s. Working at Price Waterhouse, valued for her diligence and attention to detail, plus her upbeat disposition. Her pension from that job is still drawn by Eric.

She died aged 78, still very active, of a ruptured aneurism. Her last few months were marred by worries over the aneurism, which was deep under her rib cage. After agonising considerations, she decided against an operation, which carried very high risks. This maintained the possibility that the aneurism would burst. I somehow felt we were saying unspoken goodbyes in autumn 2005, when I took her for checks at Marylebone hospital.

On February 4, 2006, it burst. As she lay in Eric’s arms before he called the ambulance, she said “this is the end of us, isn’t it?” To which he replied “there will never be an end to us”. When Rory was told of her death, he simply said “no more lovely dinners at Nanny’s”. When laid to rest, Phyllis was dressed in her white bowling outfit. It was a full house.

She enjoyed 78 years of rude health, despite being a smoker. She always dreaded the thought of finishing life in an institution, like her mum. I’m so glad this was never a possibility. Since her death, we have all discovered just how much we miss her good nature. Regretfully, I failed to give her enough appreciation while she was with us.

For several years afterwards, I would catch the faint smell of very strong tobacco as I worked in my study.