I didn’t appreciate Bill Hicks at first. Several friends recommended him about 15 years ago. I borrowed a DVD. Watched it late at night and usually fell asleep. Maybe it was his Georgian drawl, or just the beer. More likely I had yet to realise how few clothes the emperor has.

A few weeks back, listening to a podcast, the lightning bolts finally flashed. The last 30 minutes consisted of excerpts from some of Bill’s shows. I hadn’t paid him any serious attention for a decade or so. It was delightful to witness somebody lampoon power and call out bullshit with such bravado.

I think it’s interesting. The two drugs that are legal, alcohol and cigarettes, do absolutely nothing for you at all. But the drugs that might open your mind up to realize how badly you’re being fucked every day of your life? Those drugs are against the law. He-heh, coincidence? See, I’m glad mushrooms are against the law, ’cause I took ’em one time, and you know what happened to me? I laid in a field of green grass for four hours going, “My God! I love everything.” Yeah, now, that’s a hazard to our country… how are we gonna justify arms dealing if we know we’re all one?!

Comedy that makes you sincerely consider the possibility that everything you believe is a lie while you piss yourself chuckling.

This needs to be said: there never was a war.

Well, a war is when two armies are fighting. I guess what surprised me the most was the discrepancy in casualties: Iraq, one hundred fifty thousand casualties, USA…seventy-nine! So you can see, right there, there never was a war.

Watching a missile fly down an Iraqi air vent, pretty unbelievable, but couldn’t we feasibly use that same technology to shoot food to hungry people? You know what I mean? Fly over Ethiopia: “There’s a guy that needs a banana!” “Thank you, thank you…” The stealth – banana. Smart fruit!

“How do you know that?” “Uh, well … we looked at the receipts. But as soon as that check clears, we’re goin’ in. What time’s the bank open? Eight? We’re going in at nine. We’re going in for God and country and democracy….. Get motivated behind this, let’s go!”

Biting humour that rips the rug out from underneath everything being sold.

We live in a world where John Lennon, was murdered, yet Barry Manilow continues to put out fucking albums. God-dammit! If you’re gonna kill somebody, have some fucking taste. I’ll drive you to Kenny Rogers’ house.

Listening to this stuff was like medicine. No respect for the political correctness that has infected modern stand-up comedy.

Now we have women priests. What do y’all think of that? Women priests? [scattered applause] Yeah. I think it’s fine, women priests, you know. So what? Now we got priests of both sexes I don’t listen to.

I guarantee you Satan’s gonna have no problems on this planet, ‘cause all the women are gonna go:  “What a cute butt!”

“He’s the Prince of Darkness.”

I love this one.

You ever notice how people who believe in Creationism look really unevolved? Eyes real close together, big furry hands and feet. “I believe God created me in one day.” Yeah, looks like He rushed it.

Fearless in his commentaries about Bible Belt America.

The whole image is that eternal suffering awaits anyone who questions God’s infinite love. That’s the message we’re brought up with, isn’t it? Believe or die! Thank you, forgiving Lord, for all those options.

Scratching the itches that most comics dare not with their lukewarm fluff.

You know it’s true that politics does make for strange bedfellows. I read a quote from Saddam Hussein two days after the [Clinton] election, we had to wait two days for him to quit gut laughing. “Aaaahahahahaha, the elephant is dead,” Saddam Hussein says in his quote, “we have nothing against America, we just want to see George Bush beheaded and his head kicked down the road like a soccerball.”

And I thought: that’s so weird, ’cause … that’s what I wanted to see! Wow, me and Hussein, we’re like this! Who would’a thunk it?!

What’s the most daring thing you’ll see most comics do at present? Make fun of Donald Trump? Slag off Brexit? Bill didn’t do sitting ducks. He would go off on his anti-southerner rants to redneck audiences, remarking on how the locals would bring shotguns to UFO sightings, and how abduction in such a gathering was by far anybody’s best option.

You know how in many parts of our troubled world they are yelling ‘revolution! revolution!’

In Tennessee they are yelling ‘evolution . . . we want our thumbs!’ The thing is they see people with thumbs on T.V. all day, boy that’s got to drive them hog-wild huh? [mimics monkey] Trailers are shaking.

I was in Nashville, Tennessee last weekend and after the show I went to a waffle house and I’m sitting there and I’m eating and reading a book. This waitress comes over to me (mocks chewing gum) ‘what you readin’ for?’

…wow, I’ve never been asked that; not ‘What am I reading’, ‘What am I reading for?’ Well, goddamnit, you stumped me…I guess I read for a lot of reasons — the main one is so I don’t end up being a fuckin’ waffle waitress. Yeah, that would be pretty high on the list. Then this trucker in the booth next to me gets up, stands over me and says [mocks Southern drawl] ‘Well, looks like we got ourselves a readah’

Aaahh, what the fuck’s goin’ on? It’s like I walked into a Klan rally in a Boy George costume or something. Am I stepping out of some intellectual closet here? I read, there I said it. I feel better.

Wouldn’t you like to see a positive LSD story on the news? To base your decision on information rather than scare tactics and superstition? Perhaps? Wouldn’t that be interesting? Just for once?

“Today, a young man on acid realized that all matter is merely energy condensed to a slow vibration – that we are all one consciousness experiencing itself subjectively. There is no such thing as death, life is only a dream, and we are the imagination of ourselves. Here’s Tom with the weather.”

Bill died in 1994, aged 32. Just my opinion, but more of this comedy, which helps people see the world differently, would be so welcome. Frankie Boyle has a go, a guy called Lee Camp is having a go in America.

Hicks would have a field day if he somehow came back.

I visualise him slowly leaking the air from the tyres of the whole ‘Russia is more evil than Mordor’ nonsense.

I see him tearing into the US and British arms sales to Saudi Arabia, and the estimated 85,000 Yemeni children under the age of five that starved to death between April 2015 and October 2018 as a direct result.

And wouldn’t he rip apart the Julian Assange shenanigans. Assange, who founded an innovative leak outlet on the grounds that corrupt power can be fought with truth and transparency, opposed by powerful people who need to be able to lie to you and hide information from you without being inconvenienced or embarrassed by WikiLeaks.

To finish, a grand-scale Hicks thought.

Take all that money we spend on weapons and defenses each year and instead spend it feeding and clothing and educating the poor of the world, which it would pay for many times over, not one human being excluded, and we could explore space, together, both inner and outer, forever, in peace.” 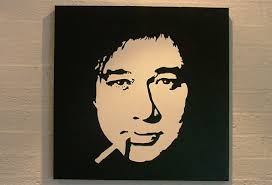