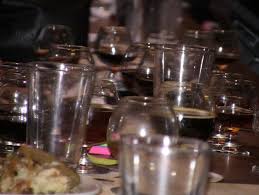 At some stage in 1977, I became friendly with a mate of Johnny Price. A guy from Stafford named Steve Lowndes. He maintained his own style in a crowd. A quiet but witty raconteur, whose eye followed successions of females.

As the year ended, Johnny and Steve asked Martin and myself to team up for a house in Victoria Road, Harborne, with a post-graduate named Phil. We moved in at the start of January 1978. Interesting place. Our front door was located next to a horology, or watch repair, business, whose proprietor was tiny. We inevitably referred to him as a midget or dwarf, but I suspect this may no longer be PC. It also had a semi-basement toilet which we named The Pit. Reachable via a set of stairs, we sometimes envisioned the room as a prison for various individuals that lacked our finely-honed philosophies.

Anyway, a happy time, when all needs were met. A room to myself. And a girlfriend that finally ticked all the boxes. Saxon and I saw the Clash, Jam and Stranglers in Brum clubs, and went to all the parties that the crew attended. A couple, yet part of a bigger crowd.

The crowning peak of this period was my 21st birthday party, held on 11 March 1978. I solicited every friend that I had ever known, using a series of printed invites that asked people to “Come and be horrible at Kev’s 21st”. As the end of the week neared, friends in the university’s chemistry labs were acquiring samples of the purest spec ethanol, for use in the party jelly.

My housemates were all supportive, given the potential damage to the property, and possible risks to our tenancy. I induced Phil into the practice of barrel-nicking, witnessing a normally quiet and calm man light up with adrenalin one dark evening as we bundled two metal casks into the back of his car. Several hundred yards into the return journey, a police car passed us heading for the site of the crime. Doubled adrenalin rush.

We completely cleared many rooms. Took the carpets up. Warned the neighbours, donned our drinking gear, and had the party of the year. A male gang of us started in a cider bar in town in the afternoon, before going ice skating to shake out some of the alcohol. We played a bit of football later on. I was getting higher and higher with joy. Lots of old mates from Southend turned up, some coming from Manchester, Sheffield and Cambridge. Mingling with my many Brum acquaintances. My cousin Mike rolled up, and I think some of the Geordie lads from the canal trip.

Mum phoned to wish me a happy birthday. She laughed at the happiness in my voice. In the end we headed off to the Plough. The ale couldn’t touch me. Have I ever been so cradled in the lap of God? In exultation, I exposed my naked buttocks to diners looking out of a local restaurant.

We got back to the house at about nine. My housemates had set up the beer, and beguilingly laid out dishes of red jelly, befitting a birthday party, albeit without the ice cream.

This was extremely alcoholic jelly, whose properties were nonetheless masked as the alcohol was so pure. Buckets of it were available for coarser recipients. Didn’t touch a drop myself, but saw plenty of people falling around in a short space of time as the spec eth went to work. Upstairs the dancing began. Downstairs beer and jelly began to be thrown, adorning walls. One girl moaned: “I feel so drunk Kev, and all I’ve had is a bowl of jelly.”

My excitement was off the Richter scale. Couldn’t stop my happiness bubbling out to everybody that I met. I nipped into the Pit and came out dressed in just jock strap and monkey boots. I had a decent figure, and wanted the world to see it.

Events continued to liven. Our tiny neighbour knocked on the door, complaining about the noise. A lad called Nigel tipped a pint of beer over his head. I squirm at the thought now, but it added to the mythology. Elsewhere, two punk girls who had been having a shagging competition were fighting for Keith’s favours. Steve had manoeuvred a girl called Karen into one of the bedrooms. People were arm-wrestling, puking, snogging, shouting.

Upstairs, I took off the jock strap and put it on my head, and began to boogie myself into oblivion. Somebody insisted I wear my red Harrington. Then a woman dressed as policewoman entered the room. I asked her for a dance. She did her pieces while I raved about how brilliant it was that she had dressed up as a copper. She continued the crap, insisting she really was a policewoman, and that if I hadn’t been in my own house, she would be arresting me on at least 5 different counts. Yeah, yeah, yeah.

What finally persuaded me was the Alsatian that bounded into the room and seemed to be eyeing my exposed genitals. We did a deal that people would have to go home. As the police searched the house, Steve would tell of how he desperately tried to put Karen’s breasts back in her bra, but would find one popping out again with each effort. Wandering around in the small hours, I found that he had somehow inveigled another well-jellied woman to bed as the event wound down.

Horrendous hangover the next day. The other lads restored the gaff back to normal, while I languished green-faced in my bed, vomiting occasionally but grinning internally at the triumph of it all. 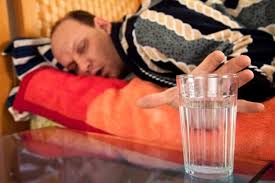 One thought on “103.The Harborne wassail”