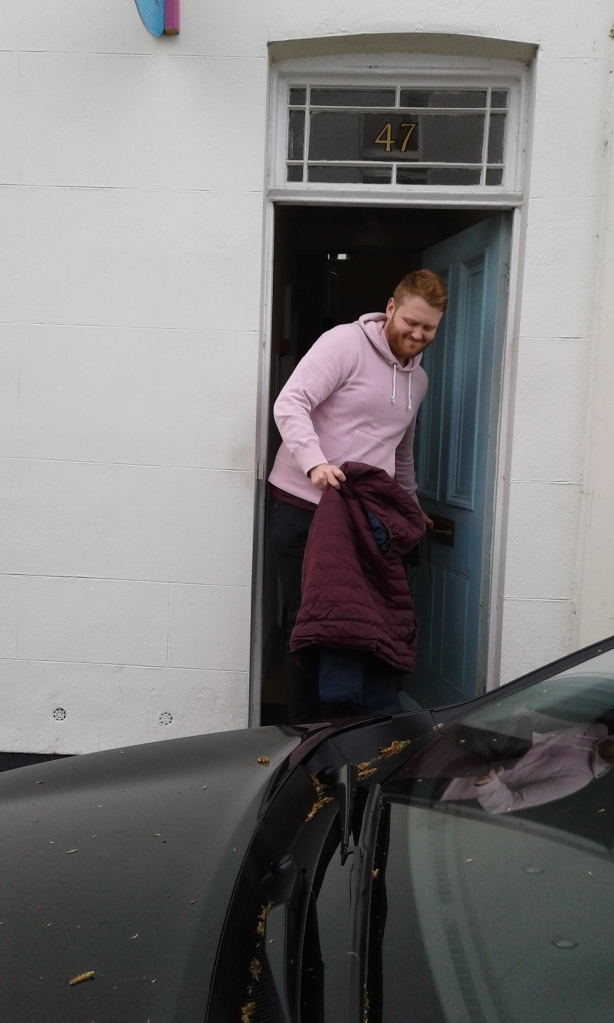 He closed the front door. Walked across to the car, where his three big giant zip-up bags sat bulging in the back.

“So where’s this pub?” He wanted me to see it, for the view.

“Cleeve Hill. Turn right, and I’ll satnav it on the phone. We walked there a couple of weeks ago.”

The hill dominated the horizon, like it always had on the BBC and Channel 4 Racing pictures. “Yeah, we had a pint and a bit of food. Have you heard of a ploughman’s lunch, dad?”

“Yes, it was once just about the only food pubs once served. Bread and cheese, usually a pork pie, pickle, tomato, bit of lettuce, maybe some onion.”

“So my mate ordered it when we were there. I had to stop myself laughing, because he was so enthusiastic. It’s pathetic. Where’s the flavour?”

The pub was coming up on the right. The car moaned at the 1 in 3 slope. But the pub, the Rising Sun, looked great.

“It was a decent day, so we sat outside. Probably too cold today.”

Inside, loads of tables, tons of natural light flooding in, punters young and old alike spread around its many spaces. Happy conversations humming. Britain’s pubs are its heart. And too many are going out of business.

“What do you fancy? My treat.”

The tables were spaced so that nobody was isolated nor too close to strangers. Window seat for us. Battered haloumi and chips for Rory. Asian-spiced burger for me. Soft drinks. Sunshine breaking through the clouds.

“So I’ve had a bet on the National. Tiger Roll.”

“Good luck with that. What price?”

“Whoaaaa……that is so short. And 40 runners, always lots of fallers. It really will need luck in running.”

“Yeah but it won it last year. And I watched it win at Cheltenham three weeks ago. It pissed it.”

I neither encourage nor discourage. It’s his life, and he seems to be loving it. We do not stop talking. It is hard to remember the growing list of topics that I want to enquire about, as each exchange opens old or fresh neural pathways. His course, his housemates, his mental health, which has encompassed some long, dark periods. Rabbit, rabbit, rabbit.

The menu claims that you can see five counties from the pub. Probably needs a clear day. I think this is a south-west view.

Back in the car. Football talk is inevitable.

“I’ve never seen a title race like this one.”

“Who do you think will win it dad?”

“Head says City, led by Roman general Pep Guardiola. Heart doesn’t mind. Guts scream Liverpool. They are winning games so late, and so luckily, that you might think the Gods have begun to intervene.”

His mate Henry supports Liverpool. “He would be unbearable if they pull it off. He doesn’t have any balance in how he sees things. It’s just a fucking sea of red bias.”

“Then he may struggle for mates as he gets older. You need to step back, in every walk of life.”

He is beside himself with glee that Arsenal may overtake Spurs in the last few games.

At traffic lights somewhere in Cheltenham town centre, there is a bar across the road.

“You ever been there?”

“Was that the one where Jed drank 18 pints?”

Rory’s friend Jed Hazel is an amazing lad. Does his own thing, with quiet determination, heedless of surrounding opinion. I met Jed a couple of months back, and mentioned the 18 pints. I told him that my old mates Shaun and Big Dad had once each sunk 20 pints in one day. Legendary exploits from the Geordie and the Mancunian, albeit with a lunchtime start. They were big lads, with lots of capacity. Jed is slight.

“Hah. No, he’s still breathing. And he has worked out how to avoid the worst of a hangover. Dioralyte, before bed and first thing next day.”

“What was he like at 20 pints? Could he talk?” Had his vision shut down? Was his nappy full?

Jeez. This guy. And in just an evening.

“He wasn’t great. As he went to down number 20, he puked on his own arm. The guy collecting glasses confiscated his drink, and told him to get out.”

“So I went outside with him. Didn’t really fancy my pint, as it was about number 12, so offered it to Jed, and he nailed it.”

We talk about the difficulty in drinking volumes of gaseous beer. Rory remembers an episode of the Peep Show, where Mark is trying to impress two women in a pub, and orders him and Jeremy a yard of ale each. I tell him about the precedents of ‘two-bloke’ comedy: The Likely Lads and Men Behaving Badly.

On it goes. Non-stop. He is playing his favourite tunes on the phone, from Spotify. Somehow we are already on the Oxford by-pass, without pausing to catch breath. Red kites start to appear, hovering high above the road, presumably seeking opportunities to size the litter of dead and mangled wildlife. I tell him about ‘The Peregrine’ book, and the stoop technique. How field upon field of smaller birds rise as one, in panic. It is the first time I have seen him prick up his ears regarding feathered birds.

This section of the road, down to the M25, is a red kite haven. Delight for one eye, the other on the road.

Alternate swigs from a water bottle. Michael Jackson is next up for discussion, as he plays a Jackson Five song. “I think he was definitely a paedophile,” says Rory. “But, if you listen to the recent two testimonies, there are anomalies, little details that don’t correspond to the rest of the story.”

I tell him how his mum has been paying attention to this. Maureen and a whole generation of women are struggling with the cognitive dissonance of trying to square great dancefloor memories with what looks like the singer’s protracted and serial child abuse. “Mum had the same thing with Gary Glitter as well. She can’t listen to him now.”

I tell him about Pete Townsend of the Who. Cautioned by police after a foray to a child pornography website, which he claimed was for research. “I’ve been playing Quadrophenia recently. Great album. Great film. You should watch it.”

I ask whether he prefers going out with his mates in Chelmsford or Cheltenham. (We have already done the conversation about inhabiting towns beginning with ‘Chel’). “Cheltenham for interesting talk, and relaxing evenings. Chelmsford for laughs.”

His housemate Lauren reckons she has seen ghosts in the shower. “She’s a pussy,” he grins. We smile about the time several months ago when he connected from our great Waltham house to his Alexa device in Cheltenham, when Lauren was alone in the house. She went through the roof at some blood-curdling song that started up in a quiet room.

The M25 is being eaten up. Outside lane, steady 85 mph. I chose the M11, and then the cut through the country from Stansted. We haven’t stopped talking. The car hasn’t rested. It’s his first time back in two months. “It’s because I feel better about everything,” he says. “I have learned to stop worrying about minor things.”

Was it your counselling? “It helped. I do feel much better.”

He talks about the film 2049: Blade Runner. “The visuals are awesome. And the imagination behind the dream of a dystopian future. I loved how the Los Angeles tribes brought down the aircraft at the start.” Film studies is his course. “And the ghost of Elvis in Las Vegas. Mind-blowing.”

“Got any future in mind?”

“Too early. Screenwriter would be good, but is probably tough to get into. I’ve got another four terms to think.”

On it went, non-stop. Not a conversational gap for almost four hours.

Back home, he hugged his mum. An hour later he was watching the big race at Aintree. I came in a few minutes later, and we saw Tiger Roll sitting behind the leaders, jumping well. I watched him as it became obvious the horse would win. Clenching his fist, but restrained. No shouting. Far more poised than the young Kevin. 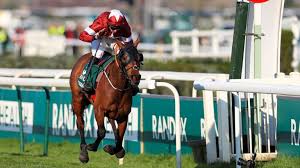 Today we’re off to watch Arsenal play Everton in the pub. I’m so pleased we had kids.