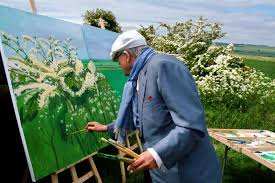 I don’t know much about art but I know what I like. And I cannot watch any television without it being in some way fascinating. Otherwise, what’s the point?

At about ten last night we debated whether to go to bed or find something else to watch. Maureen noticed that she had recorded a programme about David Hockney designing a new stained-glass window for Westminster Abbey. Within 5 minutes we knew we were on a winner. Everything in it was rivetting.

Hockney’s 2012 exhibition at the Royal Academy in London will live with me forever. The transformation of already beautiful Yorkshire countryside into glowingly colourful vistas was an act of magic, in my humble opinion. Joy shining out of each work, literally lighting up each room. All based upon the colours that he had trained himself to see, and of course underpinned by three decades spent in the constant California sun.

Maybe he has outdone himself with the Westminster Abbey window. The hundreds of hours of precise craftsmanship were often beyond my technical understanding, but the end result will stand for hundreds of years. Deservedly. It brought tears to my eyes as it was unveiled. Awesome and magnificent. 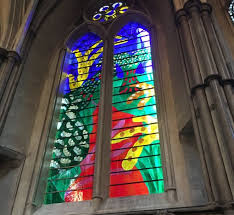 Hockney isn’t too bothered about talking, given his gift of expression in the visual dimensions. But his words are weighted with wisdom, inevitably perhaps. You don’t have to be an artist to appreciate that his thinking has been finely honed by decades of observations and practice. Entirely his own man, with humour to match.

Best of all, he gets up each day, aged 82, with excitement at what is still to be created. Which is how I have come to feel with these blogs. Lord knows I ain’t no Hockney, but the glorious feeling of giving of my best has returned. 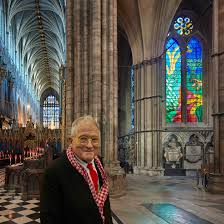