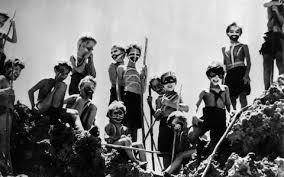 Enough of the synchronicity. Time to get back to Westcliff.

Whatever your take on the recent US shenanigans involving Brett Kavanaugh and Professor Christine Blasey Ford, what struck me most was how the details of memories from decades ago are subject to natural deterioration. If my experience is anything to go by, the emotions and feelings can stay just as strong and valid, but a ‘who/what/when/where’ blurring happens. While my feelings about grammar school remain intact, my recollection of detail is no longer sharp regarding the events that took place nearly 50 years ago.

Retrospectively, I can see that I was a bit of a hick from the sticks. Open-hearted, very imaginative, generally of a trusting nature. Not without bravery on occasions. But I lived in a village, and my dad was a scrap metal merchant, with little aspiration to middle-class sophistication.

Year one was fine, before puberty set in and ‘Lord of the Flies’ mentality came into play. I had quickly soothed my biggest worry, that the 30-minute journeys to and from school were navigable without being assaulted in some way for being a ‘nerd’. I was a better than average sportsman, and the academic rigours were well within my competence. My first year school report was excellent, and never again attained.

My first year fears were deeply primal. Like our evolutionary ancestors who took those first cautious, perilous steps out of the trees, and tried to figure out how to not get devoured by giant-toothed beasts, my radar was forever scanning the potential source of any punch or kick from my peers, while a part of my brain figured out the behaviour that might avoid the corporal punishment still handed out by the school. Our technical drawing teacher, Mr Baker, would hurl a hard, wooden blackboard runner across the room if you talked out of turn. Scary, and incredibly dangerous.

I have no idea exactly when these more physical fears were supplanted by the more abstract concepts that Sharon Brown would already have encountered at St Margarets. Such as potential loss of social status, disapproval or disrespect from fellows, ideas about inadequacy and fretting over imagined futures.

All I can do is replay, with a few tidying edits, my notes made in the Isle of Man in 2002.

I’m never quite sure how it started, but guess it was the old thing where a group needs a target, or victim, to find its focus and establish its hierarchy. The tests go out to find the point of least resistance, which happened to be me. I was never looking to score social points, nor to control people. Least of all to upset them, tease them, or strip them of their self-esteem. I wouldn’t do that to a dog, let alone laugh about it. But it was just a bit of fun, right?

What started it? I’ve a sneaking feeling that it may have come to life in the chemistry laboratory. Some standard experiment that ended with a test tube fizzing and shooting some acidic substance onto my hair. Which caught fire and went out again in the blink of an eye, slightly burning my fringe. I don’t know that it made any difference to my appearance, but somebody laughed, and somebody else passed a comment. And I was seen to flush with embarrassment.

And then I may have twisted up my words in a French lesson, perhaps, causing a teacher’s comment, and another flush across my face. And I guess that was it, a weak point was out in the open, and the vultures dived in. Teasing gradually began to intensify, and because the process upset me, and left me feeling flustered and defenceless, it was highlighted by some genius that Kev was beginning to cry. Fuck knows I wasn’t, as that had been stamped out by Eric, but it acted as a rallying cry for the troops.

So now I was an embarrassed ‘crybaby’, and feeling so bewildered about this treatment that I didn’t know where to start in defending myself. Which probably opened residues of the way that I’d felt when my father had smacked me, defenceless and open to abuse. He gave me the working class physical version, and now I was getting the middle class equivalent, in words, from these kids who were just beginning to feel their testosterone surge without having a clue to the impact they could wield.

I don’t have a clue when my gauntlet started, nor when it petered out. But I do know that for two or three years when I needed to be flourishing and gaining self-esteem I was feeling crucified. I became so scared of attracting the wrong sort of attention that I went way into my shell, lest any blunder be punished.

The cruelty progressed to the stage that I would work out in advance of any activity where to sit, what to say and do, how to deflect attention from any potential cruelty. But it could never be avoided for long, as the lust for sport overcame my tormentors.

One standout example was a time when I’d somehow trodden in dog crap on the way to school. I didn’t notice a thing, but a finer nose than mine caught on and instigated a search ending on my right shoe.

“Whoooooah boys, Kevvy-Wevvy’s got dogshit on his shoe. He must be the dogshit kid. We don’t want to sit near him – quick everybody, pull your desks away, get away from him.”

So the dogshit kid sat in the middle of the room, flushing with embarrassment, trying to smile, feeling like digging a hole and jumping in it for ever.

Just as bad, being unable to go home and tell your parents, because there were no bruises or scars, and I would too ashamed to admit that teasing could be so upsetting. When I did, Eric’s advice was nursery rhyme level. Sticks and stones could break my bones but names could never hurt. So on and on it went. “Let’s have some fun and upset Kev. What little gems can we dream up today? How about the theory that ginger-headed lads never get girlfriends, or that West Ham supporters are queer. Hey his mum’s called Phyllis – let’s change that to syphillis? Ha ha ha ha ha. Hey, I think he’s going to cry again. Are you crying, Kevvy-wevvy?”

There were other repercussions that span off from the fear of verbal bullying that I came to carry around. I began not to be able to see the blackboard so clearly at school, from about the age of 14. I either sat at the front to remedy this, or cribbed whatever needed copying from the lad next to me. What I should have done was to get some spectacles, but glasses were the preserve of boffins, and to have to become “four eyes” along with the other crap would have been too much to endure.

So instead I squinted ever harder at the board and indulged in what must have seemed like acts of madness to bus drivers, flagging down their bus and then waving it on, imperiously, when I saw that it was the wrong number bus for Bowers Gifford. Or sitting at home in front of the telly, never quite able to pick out the picture precisely for a period of years until I was at University, and could finally get myself some specs now that I was among real friends again.

I wish that there had been physical bullying, so that I could justifiably have let a fist fly. But using your fists after being called a crybaby? The only time that I let fly was when it was physically deserved, in one of the soccer games that we would play at lunchtimes, when one of the tormentors kept kneeing me in the thigh from behind. So I let him have an elbow in the ribs, and he never did it again.

I got up on scores and scores of mornings not wanting to go to school, but putting myself through it because I felt that nobody would listen or support me. I never understood what was happening. I suppose it was a bit like being smacked: you carry on loving the abuser and trying to please them. You don’t know what you’ve done to deserve the lack of love, and subconsciously blame yourself that the abusers have been forced into acting so dreadfully.

By the time of sixth form it had stopped. But the inability to cry out for help has plagued me for much of my later life, when I will simply sit on problems that seem irresolvable.

Who said or did precisely what? That really would be guesswork, and has been of decreasing interest as I’ve got older. You acquire perspective, and see much more clearly that life brings hard knocks. That others go through worse, that school is a terrible crucible. And that you were never an angel.

But the feelings stay. I picked Rory up from infant school one day, and could see that he was getting more and more upset as a couple of his ‘friends’ had been teasing him remorselessly about his relative inability to climb a fence or match their speed.

On the way home he said: “They broke my heart Dad”.

Tell me about it.

More perspective on this next time.