I had never ventured further north than Norfolk in my life. Yet here we were in September 1975, heading into the unknown, up the M1, then the M6, in the drizzle. Both wondering what was waiting at Birmingham University. Paul had a habit of flicking his wrist off the wheel every few minutes to view the speedometer.

I had no picture of this future. What the accommodation would be like, or what the degree course would ask of me? How easily I would make friends and whether new women would be on the agenda sooner or later. Both of us had girlfriends at home.

But when you are that age you don’t know enough to worry excessively. We swung into the city off the famed Spaghetti Junction interchange, noticed Aston Villa’s floodlights and eventually emerged into southwest Birmingham. Both remarking on how leafy the place looked, contrasting with the traditional grim caricatures of England’s industrial heartland. We headed first for Paul’s digs, in Kings Heath, and dropped his gear off. Then back to the University campus, and along to High Hall, my new home in Edgbaston. 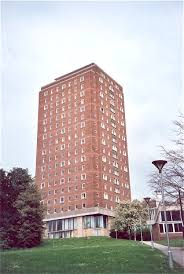 A notice by the lift told that I would be sharing a room with a certain Jonathan Marks, up on the 10th floor. Up we went. Jonny was stretched out on the bed chatting to his pal Mark Ford. Like Paul and I, they had also gone to the same school, in Chigwell, Essex.

I blurted out the first thing that came into my head. “So you smoke, then, you cunt?” The C word was often used in Southend as a term of endearment. It broke the ice, anyway, and we all swapped backgrounds. Mark was in a room with a guy called Willie Jackson from Manchester. Willie was a mate of another Mancunian, Ray Howarth, who shared a room with a guy from Matlock, John Noble. Paul was in digs with a little Yorkshire lad called Don. We all became mates. And then John knew these Geordie lads, Shaun and Andy, who knew Neil, from Manchester. And so the circle broadened. It was immediately noticeable that these northern guys were warmer towards people than the southern equivalents I had known. And would all (apart from Don) buy you a pint readily.

That first year was OK, acclimatising me to living away from home. I tried chips with curry sauce. Marvelled at the Brummie accent, and visited new football grounds, and old school friends at their new digs in Manchester, Nottingham, Liverpool and Cambridge. Most notable was a deeper perspective on alcohol. I’d been drinking the stuff for two or three years, but never with the freedom to stray far from the shallows. It had been necessary to get home, get up the next day, and remain in a semi-civilised state to keep parents happy.

Alcohol provided some occasionally memorable punctuation marks in year one at Birmingham. I wasn’t happy, due in large part to the academic side. I look back with some regret that I did not enjoy speaking Russian, probably because I didn’t enjoy speaking English at a formal level. I had always been able to hack languages at the written level. The oral side tended to flummox me as its complexity grew.

Intriguingly, I had ended up on a course with 14 girls, and no guys. Lucky Kev, my new mates would say, but there were cultural and intellectual gaps that I made few efforts to bridge. Sport, rock music and beer found little resonance. I fancied one of them – Ursula – who teased me half mad for little return. Adult me now sees a squandering of potential access to a large supportive set of females. Including one larger than life Yorkshire lass with whom I once ended up at the side of the M1 hitching a lift. There was also a Bulgarian woman, and a couple of mature students. All people that I could have learned from.

At the end of the year I was able to switch courses to American Studies, a combination of US history and literature, plus other bits and pieces. The attraction was threefold: I didn’t have to speak a foreign language; you could read a lot of novels; and there were just 8 hours of weekly tuition. Opening up a lot of morning lay-ins.

Was I designed for academic life? I plodded through most subjects, probably because nothing fired my imagination. As an illustration, at age 17, Westcliff High recommended me as possibly worthy of an Oxbridge place. Couldn’t see it, but caught a train to St Katherines College in Oxford, for an interview to read history. Alongside me, inevitably, was Paul Seligson. So there I was, lined up in front of three history dons, eminent men in their fields. They asked why I wanted to study history there. That was difficult, because I didn’t want to. I had sat with Paul and another mate Gerald Coombes in the dining room at one of the Oxford colleges the night before, and never felt so out of place. We had entered a time warp, where grown men wore hats and gowns.

I fed some cliched lines about my love of the subject, in particular 20th century history. Blah. blah, blah. Then they asked what extra-curricular reading I had carried out on WW2. I had cited that as a specialist area. My sole thought was sitting up all night reading novels by Alistair MacLean in my early teens. “The Guns of Navarone”, I replied, earnestly. Had loved that book. And the film. What a hick from the sticks. Boy next to the barley field.

Back to Brum, where three weekends stood out. In early 1976, some 12 or so Southend acquaintances came to stay in Room 1016 and a guest room hired upstairs. We had a beano, hitting the town on the Friday night, then taking the train to watch Derby vs Southend in the FA Cup, before getting massively drunk again in the Union bar on the Saturday night. I think Ian Dury’s first band, Kilburn and the High Roads, were playing.

The evening was night-capped as we made our way home just before midnight. Outside the Barber Institute of Arts stood a statue of George the First astride a stallion. It was ostensibly protected by a set of extruding railings, but yours truly and John Devane (then at Sussex University) managed to climb past these to get beneath the horse and announce that we were male equivalents of Katherine the Great. A Russian czarina noted for her sexual experimentation with stallions. We pretended to fellate the horse, one of us sucking on either side of its member. Such was our sophistication. I almost fell off the edifice with laughter.

Another fine weekend saw the arrival of two Southend lads, Nic and Mike Beaver, on Nic’s motorbike. I reached previously unimagined heights of delirium, fuelled by alcohol and merriment, in a way that set the tone for the next two years. It was the first time that a gang of us stole a barrel of beer, which also became a theme in that period ahead. We got it back to my room, puzzling how to open the thing. Our Geordie mates upstairs set to work, possibly persuading their alcoholic tutor mate to lend his beer tap and valve.

The next thing I knew we were all somewhere downstairs with a girl called Helen, who was already very drunk. Andy our Geordie mate seemed to be dipping his penis in a jar of marmite, and asking Helen to lick it off. Her boyfriend sat next to her, pleading lack of appetite. I was knocking back the alcohol as if tomorrow would never come, falling about crying tears of happiness at the incoherent joy of it all. My next memory is waking up in my own bed, on the Sunday morning, with a head that screamed only pain. There was an overturned beer glass on the windowsill, drip, drip, dripping its last contents onto the sheets beside my nose. General snores and farting sounds around the room as male bodies slumbered.

When full wakefulness returned, I found to my eternal regret that I had missed what I now like to think of as the ceremony of the lake, harking back to the nobility encapsulated by King Arthur and Camelot. Once I had been thrown unconscious into my bed, a wheelchair was commandeered from somewhere. The lads placed one individual in it, rolled him down the hill outside High Hall, and then to a bridge that crossed a section of the lake amid two halls of residence. The swans were enjoying the night air, and one especially magnificent creature swam towards the bridge, where it had failed to see our mate preparing his armoury. He was squatting perilously, pants by his ankles, bare arse hanging out over the water. As Sammy Swan glided, almost below, the order to fire was given. The turd fell noiselessly through space onto the pristine feathers of the proud swan, who reportedly rose from the water in ruffled outrage.

The third strong memory is visiting John Madden in Manchester. I went with Paul (who else?) and Ray Howarth, with a plan to see Manchester United play West Ham at Old Trafford. But Friday night first. We crawled through some of the city’s pubs, including a Yates Wine Lodge and somewhere that would only sell half pint measures of Theakston’s Old Peculiar, so intoxicating was the brew. Paul was rude to a pub landlady. We went to a party, I got out of my skull, and can vaguely remember puking by a door, and being half carried home by John. It sounds awful, but carried a powerful thrill as the alcohol was kicking in. So ill did I feel by Saturday lunchtime that it was touch and go whether I made the match. Hammers nut-jobs had daubed “West Ham celebrate Munich ‘58” on Old Trafford walls. We were hammered 4-0.

One further positive was getting to see some great bands, including the Stones and the Who at Bingley Hall, Stafford. And somehow I ended up in combat with the university’s most psychotic student, a guy from Stoke called Bernie. One drunken Saturday night he came rushing up to a group of us who were singing harmless football songs. Stoke City scarf around his neck, and jacket sleeves rolled up, he booted me in the knackers, which were fortunately anaesthetised with dreadful Mitchell & Butlers beer. Even so my timing was good enough to land a punch on Bernie’s chin, which was the last but one punch I ever threw at anyone in anger or self-defence. A car veered close, and both of us backed off. It occurred in the sober light of day that I had traded blows with a psycho, escaping with just a bruised bollock.

These were cameos that misrepresent a generally dull 1975-76. Oases in the desert.