Things had changed at home when I arrived back in Essex in summer 1976.

While I was in Birmingham, Eric had blagged himself a new job. As the secretary of the golf club where he had been a member, Maylands, in Harold Park, Romford. After the slow decline of his scrap metal business, other metals sector jobs had proved unsatisfactory, so this was quite a coup. The Bowers Gifford home was sold, and we had a new family home in the course grounds, living in a flat above the professional’s shop. . 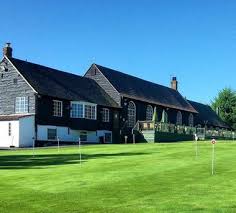 We inherited a new dog, Suki, and a feral cat, Clay, that would curl up with Suki each night, and terrorise our cat Fred. I played a few rounds of evening golf, always gratis, but lacked the skills of my brother, dad and mum. Phyllis now worked in the Basildon offices at the cosmetics manufacturer Yardleys, and kindly got me a job for a month or so to fund another holiday in the sun.

Majorca, this time, with the Southend crew. No Paul Seligson. From left to right, Bill Butcher and Paul Spracklin, John Madden, Nick and myself in the pic below, which Al took. The observer of layers, which we needed in the rain.

Honestly, I didn’t rate this holiday as highly as some of the others did. Picked up a tan, some OK memories and a couple of rough hangovers. We stayed at Nick’s uncle’s flat, within an apartment block in Santa Ponsa, half a mile or so from the beach.

My best memory is probably dancing freely to Bowie’s ‘TVC 15’ in a local club on our first night. Flailing around and letting it hang out. Nick and I were joined by a little blond girl called Jane, who pulled me …… and then changed her mind on the beach the next day when she saw Bill. Jane’s younger sister Jessica got cosy with Al at some stage. We stayed in Santa Ponsa most evenings, after one pricey trip to the clubs of Magaluf.

The days were relaxing. Tanning up nicely in the heat. Reading in the shade. Long swims. Keepy-up soccer. John hanging by his legs from trees and performing beach handstands. Burgers, paellas and cold cokes for lunch. John and I worked long and hard to perfect a stunningly handsome look where we closed one eye and bent our bottom lips downward. Bill didn’t want to play.

The holiday is remembered by some for an evening when I disappeared and then pitched back up at the flat in the early hours. We had befriended a group of Irish girls the previous night, and I had kissed one and then changed my mind in the cold light of day. Like Jane did!

It was awkward. Always aware of others’ feelings, I tried to make it clear, with kindness, that I wasn’t interested. And ended up drinking alone in a bar where the others sat outside. After that, who knows? I returned to self-awareness some time later in the dark at the back of a restaurant, somewhere near the beach, with a mangy dog sniffing around me. Walked back uphill to our residence, but for some reason relieved myself by the front door of a nearby flat. One turd deposited neatly on the doormat. I was told this was mine. Nick was livid, while everybody else cracked up laughing.

Worth noting that Paul Spracklin diced with death or serious injury a couple of times. He climbed over the flat’s balcony some 4 floors up, in an existential exploration of gravity and space. Having survived and returned, he also veered off the side of a road at one stage, maybe dropping 15 feet before his fall was broken.

All pleasant enough – unless you were the doormat owner. Once back in Essex, I was itching to return to Brum. It felt as if there was something big in the offing.