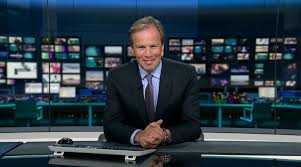 I try and keep the blog positive. Dollops of grease to the wheels of life, which can be a tough gig.

But Tom Bradby drives me mad. He cannot seem to read the news without letting his views creep in. Has somebody given the ITV news anchor the idea that viewers need a nudge to see where their best interests lay?

Not a newswatcher at the best of times, I came across Tom just a couple of years ago, shortly after Donald Trump came to power. Trump had done something or other – again – that didn’t fit with the established idea of how US Presidents should behave. Tom opened by providing context, rather than news. “Now if you think United States political protocol is being turned on its head, wait until you see this!”

Tom, tell me the news please. I will then make my own mind up.

His rendering of news from Syria was usually a disgrace. So often letting leak his starting position that President Assad is an evil tyrant. Just the word Assad makes Tom’s eyebrows lift and he lets out a little sigh, hardly perceptible.

Tom, you stupid cunt, tell me the news please. Then I can make my own mind up.

Mr Bradby even tries to whet our appetite with a pre-news trailer. He leans nonchalantly in front of his desk, papers in hand, lips pursed. Head slightly cocked. “Wait and see what we’ve got for you tonight.” News as entertainment, as frisson. Tom as the circus MC.

This silly fucker gets £500,000 a year for his efforts. It’s not just me. Maureen, who is far less cynical, gets him now. “I can see why you dislike him so much,” she offered the other night.

Obviously he reads a prepared script, but he could deliver that in ways that are less patronising, and that do not craftily lecture his audience. Given that he used to be a royal correspondent, perhaps that is a vain hope. 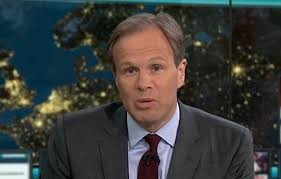 In the end, it matters little. His style may be more irksome but he is no different to all of the other journalists who give a free pass to systems that favour an elite minority, and where the impact of wars, economic extortion, debt and assaults on civil liberties are felt down the chain.