As the summer of 1980 proceeded, I worked, saved prudently, and had a notion to fly alone to the United States, and travel around by Greyhound bus. Something better came up.

My fireman pal Mike Beaver rang and said he fancied a trek to the Greek islands. Having company was far preferable, and so we departed one week later, with no plan except to cross Europe by train to Athens, and take it from there. From Victoria we travelled to Dover, then the boat crossing to France, and onto Paris, for a late lunch. Next a leisurely stroll around, as we prepared for the overnight train through the Alps, into northern Italy.

Memories of this leg of the journey include a non-stop bumping of my head against the woman to my left throughout the night, as we drifted fitfully into sleep. Then walking out into the corridor in the morning, stretching, to be greeted by fantastic Swiss and Italian mountain views.

Onto Venice. It was surreal to emerge from the Santa Lucia station and see gondolas floating past on the Grand Canal.

The reflection of buildings shimmering on the water. Everything was golden, to my young eyes. I fell head over heels in love. The architecture and waterways. Never-ending narrow passageways, where Donald Sutherland and Julie Christie chased around in the film ‘Don’t Look Now’. The sound of lapping water never far.

The weather was hot. The city full of young people, and the evening sultry as we ate out and drank beers in cafes. I was overwhelmed. I recall thinking at one point that if there was a God, able to stop the clock right now, then fine by me. The holiday was already magnificent even if Greece was never reached.

We spent a cheap night on the station floor, then began the long journey through Yugoslavia. The train was full, and the bogs soon brimming with shit and dirty paper. I began to feel feverish. Mike looked after me like a true friend, keeping me fed and watered while I battled it off. Some soldiers sat in our carriage and we conversed in pidgin Russian. We arrived in Athens some 28 hours later, finding a pension for the night, taking a trip round the city, climbing up to the Parthenon and then heading out early the next morning on the metro to Piraeus harbour.

We didn’t have a clue about a destination. Just somewhere in the Cyclades. Found a boat to Paros and jumped on. Arrived at night, with sparks from the boat funnel shooting up into the night sky. Rested in our sleeping bags on the beach for an hour or two, and then found some cheap rooms over a taverna. The sun rose over a long sweep of bay, edged by rows of traditional white-washed Greek buildings. Hills rising behind, that we would climb a couple of days later, smearing our trainers with thyme and sage fragrances. 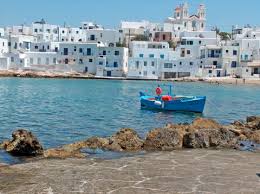 Every night in Paros was a cracker. The first evening we met two Scouse girls. We drank lager and ouzo, and went to a dance hall where I let myself go bonkers on the floor, just enjoying the moment. I walked one of the girls back to her campsite, and we sat outside, at the end of the bay, indulging in mental gymnastics about how the evening should end, or carry on. I shrugged my shoulders and walked home. Being in Paros was pleasurable enough without playing games.

A couple of nights later we met a couple of likeable Italian lads in a bar, one of whom was extolling the virtues of sex on a lilo. Mike took a real shine to these guys, being part-Italian himself.

Occasionally, when you play soccer, an opportunity occurs where the ball literally falls into your path, the goalie is out of position, and you cannot help but score. I checked out the dance floor, where a Scandinavian-looking woman was having a jig on her own. She came over, and uttered words that remain immortal: “Where I come from, in Sweden, we go straight up to a man and tell him if we want sex.” I had been celibate for over a year. It was a Godsend to have somebody cut through the word games with a kind invitation.

To feel desirable again was such a boost, after the transplant escapade. As Mike and I stood at the same bar the following evening, two Danish women latched onto us.

Just as memorable was an intriguing five minutes out in the sea, on the first afternoon. We had walked around the bay, to the very end of the headland, and were stretched out on a deserted, hot beach. Mike adored the sunshine. His dark skin soaked it up better than mine. I was caught up in ‘The Magus’ a novel by John Fowles, set on a Greek island. Every 15 minutes or so we would plunge into the water, as clear a blue as I had ever seen. A solitary chapel overlooked the beach.

The tides were fairly strong. I would let myself drift out, on my back, just floating, opening my eyes occasionally to check my position. Until the point where intuition warned of the dangers. As the bell tolled up on the chapel to mark the hour, the feeling that I was being looked after, more so than at any time since very early childhood, made itself known. If it had a voice, it might have said: “You’ve been through a testing time, now relax. You’ll be OK, just carry on, we’ll look after you.” The feeling was fleeting. I said nothing to Mike.

We took the ferry on to Ios, where I had my first experience of sleeping in a mosquito net, and hearing the little bastards buzzing outside the net. Other highlights included a club on a hill atop Ios Town. Delicious sea food by the quay. And a beach where some people walked around with no kit on. 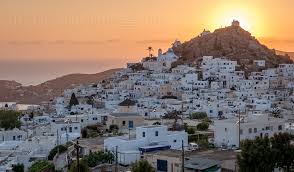 Then it was onto Santorini, a volcano-cum-island with black sand, and never-ending steps up from the main harbour. 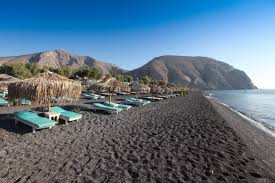 Ios and Santorini were both enjoyable, but nothing on Paros, where I harboured visions of retiring to write blockbuster novels. Still do. Looking cosily out at the whipped sea in the winter as I sit at the PC, and soaking up the heat in the summer months.

On the boat back to Athens I lent my book to an Irish girl, who promised to return it by post but never did.

I think we were away for almost three weeks before the anti-climax of the train rolling back into London. I’m still grateful to Mike for dreaming up the idea, being my companion, and listening to my incessant jokes without throwing something at me. Top bloke, very kind and accepting while completely his own man: practical, calm and competent. I’ll never forget our jaunt together.