Maureen created this picture a couple of days ago. With her typical colour, attention to detail and wit.

The second time we met was 459 months ago, in late November 1980, almost two months after the Southend introduction.

Inveigled by Maureen’s mate Sue, my mate John Devane invited me over to Chelmsford. To the Saracens Head pub, in the high street. It was a cold Friday night. She looked just as good as on the first evening. I felt a nervous anticipation. But mixed with that feeling from Greece that I was being looked after, that all would be well.

After drinks, we strolled over to Dee-Jays night club. We danced, pissed, to Eddy Grant. That was big fun. The snog was only a matter of time. And so it went.

She reckons she chose me. I know that I gave her the choice. Leaving Sue’s early the next morning, I scrawled my number on a beer mat. “Call me if you fancy seeing me again,” or some such. She did, which saved me from having to chase.

Maureen Dubber must have already trusted me deeply by the next Wednesday evening. She came to the door of her house on the East Ham estate, in Brentwood, wearing the frumpiest cardigan imaginable. In the Boar’s Head pub in Ingrave, she trusted me further, relating affairs of the heart and loins. She laughed at my stories and jokes, which came flooding out whenever an attentive listener appeared. There was a maturity about her, and a kindness, that complemented her sensuality. She seemed to accept me for who and what I was.

And so I decided to tell the truth about my hair, still an ultra-sensitive matter. After the first in a series of letters to her, she was sweet about it. I found out later that she had undergone painful infant and junior school days. Mainly spiteful comments about her puppy fat. Those hurts never really leave. They made her sensitive to others, and an empathic listener.

A month or so later, sitting opposite Maureen at her friend Allison’s house, it hit me that I was completely trusting of her, found her company a constant delight, and fancied her with an ever-rising heat. Later I said the three words for the first time. Tentatively, but truthfully, sensing that I was opening a gate to the unknown. I love you.

That spring, by the time that I had moved into a shared house in Rose Valley, Brentwood, passion was starting to tip me over. That is how it was. A time that never happened again. The Rose Valley time, which I had wanted for so long.

Looking back, it was as if every aperture of sensitivity in me was torn open. Even saying goodnight to her outside her house was delicious, as I could dream about her on the way home. I used to stroll back alongside the railway line, singing the line from the Police song: “Walking back from your house, walking on the moon. My feet don’t touch the ground, walking on the moon.”

I still remember the thrill of being told by her in the Sir Charles Napier pub, in Brentwood, that our sex life “just gets better and better”. Bliss mixed with relief to know that it wasn’t one-way traffic.

I paid for the ups with the downs. For me, the cycles of our relationship were emotionally exhausting, a roller coaster ride. Utter delight, eyes transfixed, unable to look away as we joined. Hypnotised, I could not look away, my heart no longer mine.

Then plunging lower and lower in her absence. I worked the night shift at Thermos, the vacuum flask maker in Brentwood. One afternoon, as I went for a run to clear the cobwebs before work that evening, I had to stop by the side of the road and throw up, so lovesick was I.

It was part ecstasy, part agony. I wrote out the words from Paul Weller’s lovely song ‘English Rose’, and dedicated it to her. I think I may just have lived up to it, by the skin of my teeth.

Sitting in the Seven Arches pub, or the Brewery Tap, wrapped up in each other’s eyes. 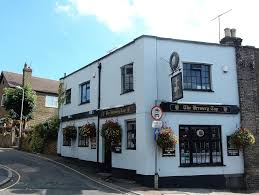 Later she would go, and I would steadily go mad waiting until the next time I could see her.

1981 was a summer of great parties, where we would take my dad’s car up to London or elsewhere. In Lewisham, and Chislehurst, where we slept in the car outside. In Amersham, we went to a party thrown by Shaun’s forestry ranger mate Steve. Before it started we went in a pub, and sat at the bar. Maureen was wearing a white teeshirt, with her jacket draped around her shoulders. I could have eaten her there and then. I have never wanted anybody so much……apart perhaps from the time when we had a party in Rose Valley.

Bed space was at a premium, and Tim Devane had crashed out on mine. Maureen crashed down next to him, leaving me trying to get to sleep in the kitchen at four in the morning. No success, so I tramped up and down the streets of Brentwood feeling like an unreleased pressure hose, with zero blood available to my brain.

And then, when all had gone home in the morning, we snuggled into one another.

Also a pregnancy scare. One day I withdrew wearing one less prophylactic than when we began, which was both funny and frightening. Far from ready for kids, I was equally ready to help M do whatever she felt was necessary. Which meant having a child, if that was her choice. The condom thankfully re-appeared a few days later.

We went to Wales on holiday, and caroused hard in a Llandudno hotel room. We popped into Moseley to see Shaun and Fran on the way back, and persuaded them to come to a party in Essex. It is impossible to put into words how besotted I was during these months. There were nights of such passion, and laughter, and love, and once speed, which was a passion killer.

It came to an end, of course. My last but one night in Rose Valley was a balmy September evening. We walked with my housemates Pete and Paul to the Thatchers Arms out at Great Warley. Paul Garrett, who died a few years ago, was in great form, making us all chuckle. Then home, and puffing on somebody’s marijuana in the kitchen. Paul placed his head in the oven, in mock suicide mode. And so to bed, before driving with Maureen the next day out to Herne Bay, in Kent. I was starting a teacher training course in Canterbury, and she helped me take all my stuff across.

I woke up on Monday morning in an empty Rose Valley room. Everyone had gone to work, so I gathered my last few bits, left the key and caught the train to Kent. Feeling very nervous about the new adventure.