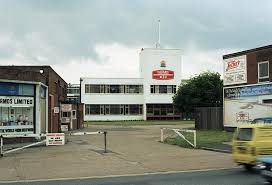 At 6 a.m on the morning of June 3, 1981, I rolled out of the factory gates onto the Ongar Road, in Brentwood. I was making vacuum flasks for a living at the Thermos plant, pictured above. Standing on a production line through the night, making the time pass by telling every joke and story I could ever remember. Listening keenly to every story and joke told back, to flesh out my repertoire.

Good times, in retrospect. Even when the conversation ran out, I was self-sufficient, quietly glad to be alive. Rummaging through my memories, writing letters in my head, fervently anticipating the next tryst with Maureen.

One morning I was met by my house mates, who had stayed awake through the night on magic mushrooms. But most mornings I would walk back towards the shared house in Rose Valley with Dave, who caught a train back to Gidea Park, and Ron, who lived past the train station up in Warley.

We would stop at the paper shop. Dave bought the Daily Mirror, and Ron the Sun. I bought……the Guardian and the Daily Mail. Solidly right-wing and left-wing newspapers, with about as much in common as Stalin and Gandhi.

Politics had nothing to do with it. My parents had taken the Mail, and I had followed the horse racing tipsters, getting acquainted with how they thought. But the best and most interesting tipster of all, Richard Baerlin, wrote for the Guardian. So I bought both.

Interestingly, the number two racing writer at the Guardian was David Hadert, whose daughter Julie was one of Maureen’s best friends.

Richard Baerlein had been a racing correspondent for 44 years when he saw Shergar make his debut at Sandown in April 1981 and win by 10 lengths. He saw that bookies were offering 8-1 on Shergar to win the Derby, and contended in print that “now is the time to bet like men”.

On June 3, I got home, made a cup of tea and poured the milk on my Weetabix. The house was quiet. I opened both sets of racing pages. The odds on Shergar had fallen to even money, or 1 to 1. Baerlin made no bones about his view: the horse couldn’t lose unless its jockey fell off, which was highly unlikely in a flat race. He backed this up with some startling collateral form and clock-based logic. He was quite adamant: no other horse could win this race.

My aim with betting was to increasingly work things out for myself. But others knew much more, and sometimes you had to pay heed. The gut feeling was that it was time to test my nerve. I earned £70 a week, with £30 of that going for rent. Saved a tenner and used the other thirty for food and entertainment. The most I had ever bet was £10, which was an exceptional amount.

Set the alarm for two o’clock. Awoke with some excitement. Quick shower and up to the bank to take out fifty quid from the savings. Sunny afternoon. A small independent bookie just around the corner took my bet, at even money.

The TV in my room was crap. Sound but no picture, unless you counted the Jackson Pollock-like fuzz that wobbled across the screen. So I listened, heart in my mouth, as the race unfolded, and then with growing joy as Shergar hit the lead, going easily, three furlongs out. One furlong out, the commentator shouted that “you would need a telescope to see the rest, he is at least 15 lengths clear!”

Another headline the next day summed it up: “Shergar first, the rest nowhere!”

I won £47 after deducting the betting tax on my £50 bet. Richard Baerlein did so well out of Shergar’s victory that he named his house after him.

Shergar did OK for the next two years, standing at stud in Ireland. Then he was kidnapped, and never seen again. Equally famous for his disappearance as his phenomenal racing ability.

Great memory. And back in mid-1981, another building block in my slowly growing conviction that horse racing, carefully handled, could reel in wheelbarrows of money, happiness and independence. 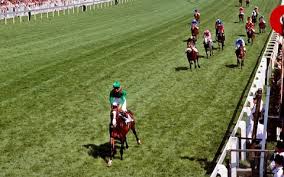