From late November 1981 I was alone, for the first time in my near 25 years. With no money to maintain any regular contact with the teacher training students at Canterbury, nor to visit friends, it was only my habit of writing letters that kept me linked to my former life.

I would occasionally bump into Helen, Grubs and another housemate, Pete, in the kitchen or lounge, but tended not to pursue that. Didn’t have much to say. Certainly no regrets about ditching the course. Was I lonely? Probably. Didn’t see any kind of future, at the foot of my self-dug hole.

But I had an optimistic nature. Still have. I found my own company comfortable. Things would work out somehow. They always did. I remember walking at nights around the streets of Herne Bay, to keep fit, and eliminate the need to use the electric fire in my room. I wasn’t a TV watcher, but there was always something interesting to read, or John Peel on the radio. And I liked long sleeps.

Yet one of the jobs I considered applying for was as a milkman in Whitstable, a few miles down the road. I reckon I figured that spring would be a better time to start. Flashing five years forward, I was driving a milk float around Chelmsford.

Retrospect from a long way out can provide surprise insights. It has only just occurred – literally a couple of days ago – how the serendipity of that Christmas saved me from myself. If Maureen and I had split up at another time of the year, the chances are that I would have found a local job in North Kent, and might not have come back to Essex for many months.

But Christmas was approaching, and it felt necessary to see my parents and brother Neil. And, perhaps, Maureen. I’d asked in a letter to meet again, for a drink, to see how she was and to try and apologise for the pain I’d caused. She agreed. Was I angling to re-start things? In truth, I didn’t see how I could even consider it. Choices had consequences, and I would live with these. Grit the teeth. Move on.

Shortly before Xmas day, we met at the bus stop near Wilson’s Corner in Brentwood where we had often rendezvoused in happier times. Just the sight of her, looking brave and confident, amplified the magnitude of my loss. It hurt in my stomach.

We chatted, and walked along. Not holding hands anymore. We entered the ‘Good Intent’ pub, where my friend Ron from Thermos was working behind the bar. I had my standard beer, and Maureen her usual Pernod and lemonade. It wasn’t hard to find things to talk about, and the drink flowed easily, as we stood at the bar. It was strange, to be inches from that face that I’d loved to kiss, and the body that had driven me half-barmy with desire. As if a glass screen had been pulled down between us.

We got on well. The drink was smashing a question in quickening circles around my brain. How the fuck could I have thrown away such a good relationship? Her body language was fairly neutral, but then she had always carried herself like a great actress.

At some stage in the evening, the Human League song ‘Don’t You want Me Baby?’ poured out of the speakers. What a mirror to our drama.  As the alcohol kicked further in, I felt increasingly bereft, really quite overwhelmed by loss as we were packed together by the growing Christmas crowd. Alcohol also lowers risk-taking thresholds. A thread of chance made itself known.

I doubt that my reasoning was logical, but the thought was something like this. Let’s say that she, also, is missing “us”, even if just a little, I told myself. If that’s so, can I ever live with myself for not exploring the chance of trying again?

Rejection would have killed me off for months, but the risk of immense pain often has a shining flipside. Praying that all my guardian angels were looking down – or that the demons were looking the other way – I simply asked her. Can’t remember the words I used, but knew within seconds that it was going to happen.

Maureen’s eyes filled with tears, the first time I had seen my actions do that to her. “But I thought that you needed to be on your own, that we had grown too far apart”, she sobbed, making me love her then as much as I had ever done. “I can’t bear this, being without you,” came my truthful reply.

We fell into each other, and my evening of raw pain changed into a super-happy night. Quietly, I thanked the universe with all my heart.

Thinking about this 37 years later, it stands out that, but for the seasonal punctuation provided by Christmas, it is a near certainty that she would have moved on and found somebody else.

The Human League song remains a constant reminder of what a dick I was. 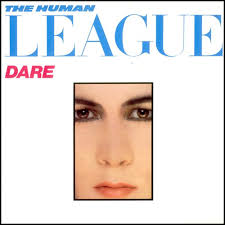