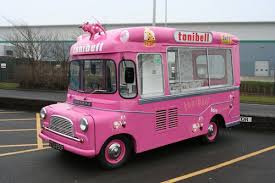 I turned into the Chelmsford close, and hit the switch. The sound of ‘Greensleeves’ pierced the warm afternoon air. Within 30 seconds the urchins came running out.

Grabbed a double cone, squirted in a decent dollop of ice cream from the machine, and dipped the thing voluptuously into the hundreds and thousands tray. Inserted a small lolly, followed by a flake, and drenched the calorific monstrosity with strawberry sauce. Lowered it down to grasping hands on the pavement. 10 pence.

It was a one-off improvisation that triggered endless encores. 10 pence, 10 pence, 10 pence. Again and again. A madly cheap price for the kids of Widford Chase, where John Devane also happened to live. I should have charged three times as much, but liked seeing the happy faces. It also pulled in more adult customers, swayed by the Tonibell man’s generosity to the little ones. A 16-year-old girl climbed in the van one evening and asked me to drive her somewhere quiet. Flattering, but no thanks – my love life was back on track.

I started the round in April 1982, badly in need of a job. Was still signing on in Herne Bay, mainly because the DHSS was paying my rent, and Maureen and I could use the place at weekends, if we wanted. Once it was clear that money could actually be made selling ice cream, I came off the dole, and lived full-time at my parents’ place in Brentwood, sleeping on a mattress in the spare room.

Setting the tone for my working life, I toiled six days a week throughout the summer of 1982. Started the day by loading up with fresh supplies at the Tonibell yard in Basildon, where a very small man called Andy would disappear into a freezer to haul out the family bricks and lollies. I wondered sometimes if he lived in there, clad in his furry parka. Then off to serve two schools at lunchtime, in Harold Park and Brentwood. Jumping out and picking up the litter afterwards.

Maybe time for a quick sandwich and a 50p each-way accumulator on the nags. By 3.15, I was parked on the A12 outside the Chelmsford junior school where all three of our kids went in the decades ahead. On a good day, the day’s expenses were paid by 3.30, and every subsequent sale was pure profit.

The rest of the round mainly involved two large Chelmsford estates, Moulsham Lodge and Westlands. On the latter, I stumbled into an ice cream war with an Italian guy working for rival company Rossi, who felt his pitch being queered by my interlopings. The mad fucker chased me round the estate one day, sounding his chimes and waving a clenched fist. It would give so much pleasure to say that we had a duel with cornettos at ten paces, or wrestled naked, smeared in mint choc chip. Practically, it made far more commercial sense to work out his approximate times and not clash with these.

Sunday was the bumper day, when people were at home. Maureen came out with me a couple of times, and almost demolished somebody’s fence when I let her drive. If it was sunny, Sunday takings could be immense. Maureen’s mum and dad often received a huge 99 on my way home.

Steve Lowndes, my old Birmingham mucker, also had a Tonibells round. He was living with his girlfriend in Hornchurch, and offered his chilled wares in Laindon, just west of Basildon. It never worked out for him, but he left a magnificent memory one day as he overtook me on the A127, shades on, chimes blaring at full volume.

Inevitably, routine set in. The van and the ice cream machine had to be kept in reasonable hygiene. The fragrance of the diesel fumes from the back of the vehicle would fail every emissions test today, and could be whiffed inside the van. The same route, same times, same faces, same orders, became a chore. Some days I only broke even, and now and then I went home early, battered by mundanity. My parents’ neighbours sometimes got the arse-ache with me, if I cleaned the van too early in the morning.

But the trade-off was worth it. All the clichés – king of the road, free as a bird, lone wolf, master of my own destiny – were spot on. Moreover I had my very own unique form of personal transport. If Maureen and I were going out, I would call round in my pink conveyance. That alone must have made her the envy of every woman in Brentwood and probably further afield. Once I even drove up to Lewisham for an evening with Tony, John, Al and Nick, sounding my chimes outside their house to let them know that the flakes were on me. How cool was that?

Even better, I managed to squirrel away three grand over the summer. Which was a lot then. The mark-up on ice cream was something like 500%. When autumn set in, John Madden cunningly suggested I heat the ice creams up, to maintain cash flow. I did sell a few hot dogs at lunchtimes, but it got to the stage where there was no profit, and so I went back on the dole. 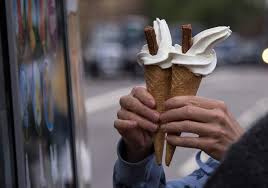