My highlight of summer 1985 came one August morning as Maureen, her best friend Sue and I were walking along a Thames towpath, somewhere in Berkshire. We were heading back to our hired boat, moored a few hundred yards further along. Bearing bread, milk, newspapers and, in Sue’s case, a magazine.

At one point the path narrowed, and Sue was forced to walk next to the river’s edge. Then she was gone. Disappeared. We looked in the river. All that could be seen was the magazine, tightly gripped in a fist, jutting just above the water level. Sue, a Scot, had paid for that magazine. It came out of the river still readable. The three of us wept with laughter, even the drenched Sue.

The boating holiday took in Windsor, Reading, Oxford and all points between. Good fun, nice pubs, great sights, fair weather, and good company, with Sue’s husband Martin making up the foursome. In Oxford, I had a pizza whose chillies were so spicy that I hallucinated, feeling like I was coming out of my body.

I enjoyed a three month summer break that year, from the July day when quitting Britvic to the dreary October morning when I re-joined the rat race. I had to go back to work, as unemployment benefit – despite its mortgage payments – was insufficient to have any kind of a life.

Equally, Maureen was travelling to London each day. That was unfair and I had to step back up. The path of least resistance – and what I saw as the best chance of a job – was a return to betting shop management, this time with the independent London bookmaker A. and R. Dennis. Six days a week by train up to Forest Gate and back.

It was depressing, a defeated return into an unwanted career. It had to be done. But so depressing that I remember next to nothing of the job. My cashier Bridget, a Geordie woman, always left a cigarette smell in the toilet. Pat the window cleaner, supported West Ham. (It was the club’s best ever season, third place). TV screens were being introduced into the shops, so the punters could view live racing. The punters were not threatening. Neither were they memorable. I hated the travelling with a vengeance.

One Friday evening, our friends Paul and Katie came over to Chelmsford, and I tipped lots of massively welcome pints of bitter down my throat in town, at the Railway Tavern. 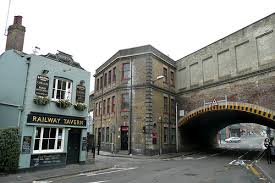 Woke at 9 the next morning. 75 minutes late. Fuck, shit, bugger, bollocks. I phoned Martin in a panic.

“Mate, I need a big favour. Can you drive me to Forest Gate by 10?” He was round in about 10 minutes, and I somehow got the shop ready before Les, the district manager, popped in at 10.30.

I think my subconscious was trying to extricate me from a life without meaning. That attempt failed.

A few weeks later, in early May 1986, Les came into the shop unexpectedly one afternoon, and stayed to watch me balance the books after racing finished. From his pocket he extracted a wad of settled bets from the shop. It was standard procedure at head office to look through the occasional batch from each shop, to check for any major mistakes or foul play.

On the top of the batch was a winning greyhound bet settled for about £240. Trap 5 to beat Trap 6 at Hackney. Les looked at me with intensity. “Remember this one?” I actually did. It was from the shop’s biggest punter, Barry, a black guy who worked in a business next door. I said: “Yep, he had been winning prolifically on the afternoon, betting it back and winning more, and I called him over for that one as he had forgotten to collect.”

He counted out the wages and holiday money owed to me. “Got no choice mate. We know it’s a mistake, as your settling has been good. But if you can do it once, you can do it again. We can’t take that chance. Too expensive. No problem with giving you a reference though.”

I didn’t know whether to exult or fret on the train home. Looking back, I believe that whatever part of our being looks out for us had deliberately engineered my over-payment mistake.

Maureen was stoical. “Don’t worry. I know you’ll get something.”

We lived just a few hundred yards from the dairy run by Chelmsford Star Coop. I got myself down there the next day. “I lost my job yesterday – you got any vacancies out on the milk rounds?”

I was told they might have something. A phone call the next day said I could start next Monday, and would get a couple of week’s training to see if I suited.

What time did they want me in?

Had I ever got up that early?